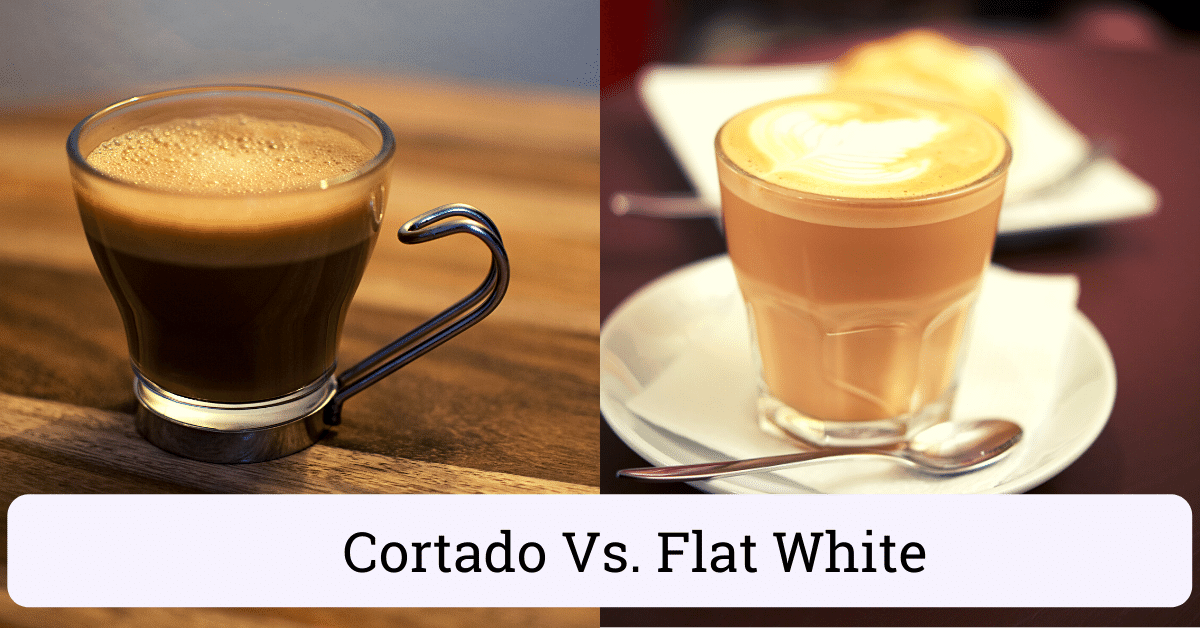 The Cortado has a bolder espresso taste. It can also come packed with more caffeine in a smaller package. The Flat White has some interesting texture and definitely puts forward a sweeter flavor thanks to the extra milk. At the end of the day, it’s the more balanced flavor that has an espresso-forward taste that’s the deciding factor for me.

There’s a lot of people out there that will tell you that a Cortado and a Flat White are the same drink. These people are missing out on some of the finer details that separate these two beverages. Once you know the differences between the Cortado versus Flat White, you’ll know what makes each drink stand out. You’ll also know what makes one of them better.

What is a Cortado?

Cortado is Spanish for “cut.” This drink contains equal parts espresso and steamed milk. The milk that goes into a Cortado is not texturized. If you want your Cortado to have a little extra kick, you can ask your barista to throw in an extra shot of espresso.

A Cortado is smooth. This drink has an easy going texture. It strikes a balance between the bold taste of espresso and the sweetness of milk.

These are smaller drinks coming in at around 130ml or 4.5 ounces. About twice the size of a shot of espresso.

What is a Flat White?

A Flat White is a drink that was first made in New Zealand—or Australia. There’s something of a national rivalry between those two nations over who makes the better coffee. They both claim the Flat White as their own, so be diplomatic about its origins unless you want to pick sides.

A Flat White is made with a 1 to 2 ratio of espresso to milk. The milk is textured and micro-foamed. You can also find baristas mixing things up and serving their Flat Whites with ristretto rather than espresso.

This makes the Flat White a larger beverage at around 6 ounces or 180ml. It’s also a sweater drink with a more subdued espresso taste. It’s common for Flat Whites to be hotter than Cortados as the micro-foaming process heats up the milk more than conventional steaming.

If your barista is showing off and making their Flat Whites with ristretto instead of espresso, you should know that means less caffeine. Ristretto has slightly less caffeine than espresso.

What Makes the Cortado Stand Out

Let’s not bury the lead here. Cortado is the better beverage in my opinion. I’m a sucker for that bold espresso taste which automatically puts the Cortado ahead. However, it’s not just about the taste of espresso. The Cortado is a delicate beverage. It’s all about balance.

There’s something zen about sipping a good Cortado that achieves a perfect harmony of milk and coffee. A great Cortado is a mark of achievement for a skilled barista. You can really experience a greater craft in a fine Cortado.

Here’s my breakdown of the Cortado’s pros and cons.

What Makes the Flat White Stand Out

With all of that said, the Flat White is still an amazing beverage. While it doesn’t top the Cortado in my estimation, it does achieve excellence in the world of barista beverages.

Australia and New Zealand take their coffee conflict very seriously. Through this, mostly, good-natured rivalry, the world has gained some new perspectives on brewing beverages. The Flat White takes a simple premise and adds plenty of character.

This is a great choice for people who want something sweater that is a league above your bargain bin latte.

Who Has More Caffeine: Cortado Vs. Flat White?

I already mentioned that a Flat White can be made with ristretto which technically has less caffeine than espresso. However, this is only the start of the discussion about which of these two drinks has more caffeine.

When it comes to getting a nice buzz from caffeine, the dose isn’t the only thing that matters. It also matters how quickly that caffeine can get into your system. A Cortado has an equal amount of espresso and milk. This means that there is less milk, effectively, watering down your caffeine. A Cortado will be able to get its caffeine into your system more quickly.

A Flat White technically has an equal amount of caffeine as a Cortado. This is assuming it was made with espresso rather than ristretto. However, because it contains twice the amount of milk that a Cortado does, the caffeine is going to be more slowly introduced into your system.

What’s the bottom line? If you’re looking for a quick caffeine fix, always go for Cortado.

One of the biggest differences comes in whether or not the Flat White uses ristretto or espresso. Ristretto is “shorter” than espresso. This means it’s extracted quicker using less water. This also means that it’s going to have less caffeine. There are some people that say that ristretto has a sweeter taste than an espresso.

A Flat White can also have a double shot of ristretto as its base. If you’re concerned about the amount of caffeine you are getting in your coffee beverages, check with your barista before ordering your Flat White.

At the end of the day, I’ll never say no to a good Cortado. A Cortado has a perfect harmony of espresso and milk. There’s something artistic about that perfect balance between flavors and textures. I can also ask my barista to throw in an extra shot of espresso and they won’t look at me sideways.

The Flat White definitely has its perks, but there’s almost no comparison against a good Cortado. Which of these two beverages is your favorite and, perhaps more importantly, who makes the better Flat White: New Zealand or Australia?