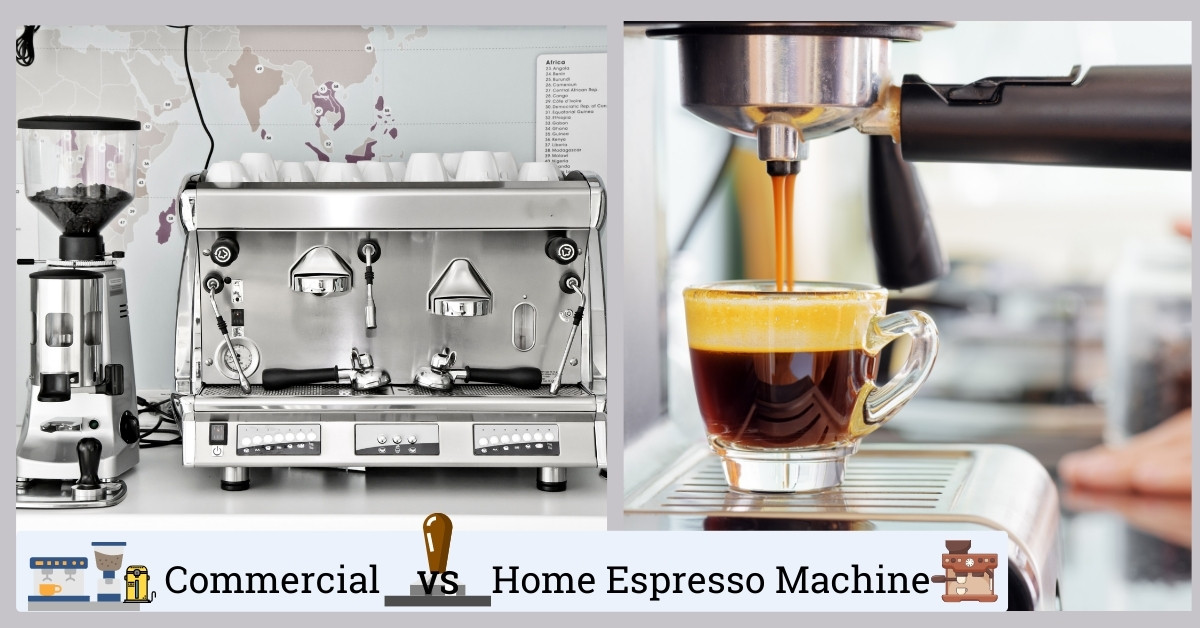 Sometimes the coffee hobby can seem like a bottomless pit from which there is no financial escape. You buy your first grinder only to find it has blades and is, in fact, a chopper, so your kitchen is still grinder-less.

You start researching espresso machines and are bombarded by info and options, many of which will leave a gaping hole in your pocket, but you soon learn that the repairs (or replacements) are expensive if you buy cheap.

The catalyst that triggers the desire to own an espresso machine is generally a good coffee outlet. You take in the venue’s ambiance and enjoy what may be a near-perfect cup of your favorite ‘joe,’ and BAM(!), the bug bites.

Now, the first thing you do is ask the name and model of the machine, possibly nodding knowingly as you are informed. Then you perform a quick internet search and realize that you would have to sell your home and car if you decided to buy one. So should you buy a home espresso machine? Read and find out.

A commercial machine is produced for the purchaser to make money from it. It’s commercial, after all, which says enough. It will need to be faster than a home espresso machine and better in every way: superior crema due to superior pressure and consistent temperatures through the group head. Also, far superior pressure for creating milk froth that home machine owners can only dream of, and much more.

Commercial espresso machines have enormous boilers for the brewing area and steam zone, the most advanced technology available, and the best quality parts on earth. This is all essential, or they would never cope with the demands of a modern coffee outlet where the machine can produce more than 500 shots per day with ease.

Commercial units have traditionally had three groups to meet the demands of their clientele, but that has started dropping to two in recent years. Nowadays, more and more small coffee outlets are popping up, often using a single group machine.

Two and three-group machines are overkill for home and beyond the budget of most home baristas. Still, the single group units, called Prosumer Machines, are gaining momentum at home with coffee aficionados.

Home Espresso Machines are made to sell in huge volumes to owners who enjoy a good coffee without paying a high price to a coffee outlet. Traditionally, they were fundamental, could not produce what a commercial machine could, and indeed never lasted as long. (Longevity is still somewhat limited).

Home espresso machines initially came with a single boiler, which was required to produce water for the group head and steam for the steam wand. Consistent temps in the shots were almost impossible to achieve. These units were far less costly than the commercial machines, and naturally, components and materials were of lesser quality, although the craftsmanship was exquisite.

Manufacturers soon realized that a large section of the coffee market was being ignored: People who wanted far more than the home espresso machines were providing, but who either could not or would not, pay for a commercial machine, which was both pricey and far too large for most kitchens.

Huge strides in the manufacture of coffee machines have been made in recent years, particularly in the home espresso arena. Double boilers were introduced, pumps replaced manual levers to force the water through the grinds, thermo blocks, heat exchangers, and heating coils were all invented or adapted. The home espresso machine revolution was on!

Manufacturers found that many customers were still balking at the cost of the double boiler units, even though you could now draw a shot while simultaneously frothing milk.

Some went the route of a thermo block together with a boiler, while others used a heat exchanger, which is a tube placed within a single boiler, making the machine less costly to purchase. Running costs and repairs were also lower, and sales increased very quickly.

While commercial machines had pretty much reached their peak in terms of a quest for the perfect cup, home units are now far better than they ever were. PID’s (Proportional-Integral-Derivative that uses an algorithm to maintain the proper brew temperature) were introduced for incredibly accurate temperature control during the brew cycle.

Large boilers now often accompany a heat exchanger to improve milk froth significantly. Even a PID is sometimes added to the exchanger, giving the barista maximum control of the temps through the steam wand, ideal for different kinds of milk that require different heating temps (oatmeal, rice, soya…).

Differences Between a Commercial Machine and A Home Espresso Machine

For the most part, currently, the differences between a commercial machine and a home espresso unit are simply size, volume, and price. Very few home baristas want a clunky commercial unit taking up four times more space than a home unit in their kitchen, and none require the volume of output for anything other than a commercial enterprise.

That said, the newer Prosumer Home Machines are incredibly quick and can even work perfectly well in a light commercial setting. 100-200 shots per day. Since home espresso machines have improved materials and technology, it stands to reason that the unit’s price would also change, and it clearly has. The production and quality gap has narrowed, and so has the cost.

Home units still start under U$500.00, but you only get U$ 500.00’s worth for your buck. If you want to pull shots and prepare drinks to the standard of a commercial espresso machine, you can pay five times that much without struggling to find a candidate.

Dollar for dollar, if you take a good, modern, home espresso unit and compare that to a single group on a commercial machine, the home unit can be every bit as good in taste, speed, consistency, and recovery for the next shot. Naturally, if the commercial machine has two groups, two staff members can pull shots simultaneously, something no home unit can replicate.

Commercial machines are workhorses dedicated to fitting as many shots into a workday as the establishment can encourage. They are rugged and will outlast most home units despite the extra workload. Home espresso machines will never work as hard, nor do they need to, but they can provide coffee every bit as good if the machine is chosen correctly.