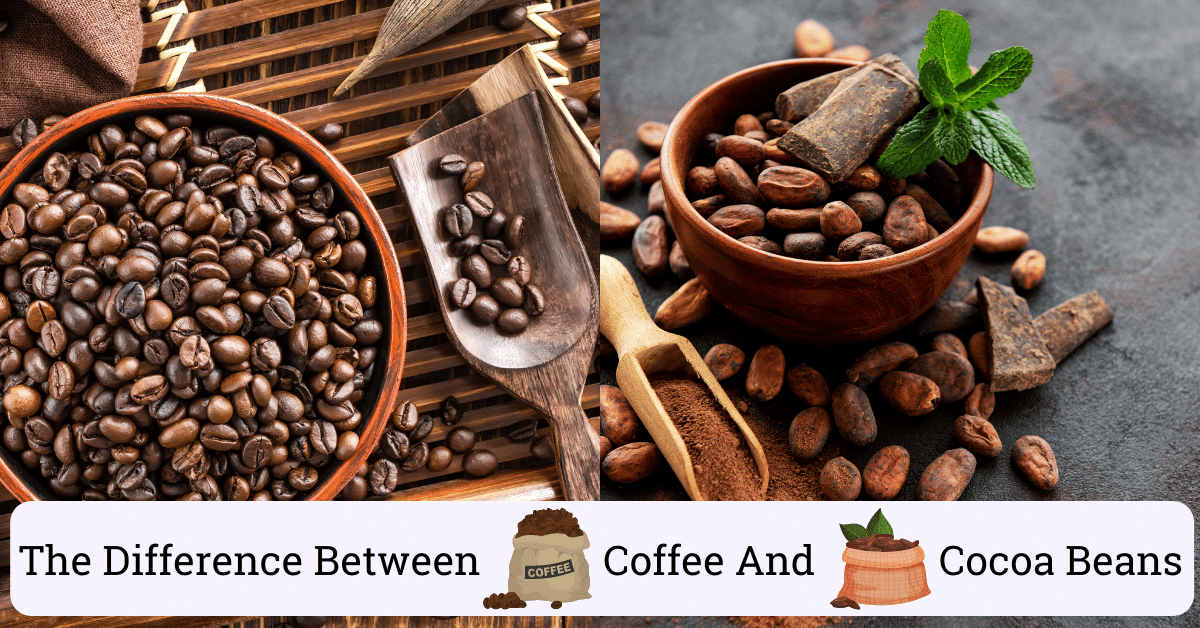 As an avid coffee drinker and chocoholic, I’ve often wondered what the difference is between the coffee bean and the cocoa bean. You might think that these two beans are closely related due to their similar flavor and nature, but as it turns out, that couldn’t be further from the truth! So, what are the differences between a coffee bean and a cocoa bean?

Coffee beans Vs. Cocoa Beans: What are the differences?

Coffee beans come from two main species of coffee tree: Canephora and Arabica, from which different varieties have developed over time. A coffee tree is a small shrub or tree which is evergreen; the tree will produce clusters of cream-white flowers with one fruit in each cluster, often referred to as a berry. The fruit will typically produce two seeds/ beans.

Cocoa beans come from Theobroma Cocao, which has three main variants: Criollo, Trinitario, and Forastero. The cocoa tree fruit grows directly on its truck and is referred to as a pod. Inside the pod, you will find fragrant and sugary pulp surrounding the beans; you will typically see between 30-40 beans in a pod.

These days coffee is grown predominantly in what is called the Bean Belt. This area ranges from Ethiopia in Africa through South and Central America, Asia, and Oceana. Coffee likes to grow in high altitudes, with it being said that the best beans are grown in places that are over 1000 meters above sea level.

Cocoa beans are also grown in the tropical Bean Belt but grow best in low-lying regions. The Cocao Tree will only grow in 15 deg. N or S of the Equator in a narrow band.

Before all the sugar and milk is added to cocoa, the taste is quite bitter with a mild earthy flavor, and if you eat the actual beans, they have a crunchy texture, just like coffee beans. Raw coffee beans are pretty acidic and are said to have a woody or grassy flavor. They are also quite hard and are therefore difficult to chew; roasted beans, on the other hand, will have varying tastes depending on how the bean was roasted.

Coffee Beans and Cocoa Beans: A little Bit of History

Just for interest’s sake, lets’ first look at the different histories of the two beans. The earliest record of coffee comes from oral records, which say that coffee was discovered in 800AD in Ethiopia; it took 200 years to move into Arabia, where it became a much sort after drink by the locals. Records show that it appeared in Europe around the 16th Century.

Cocoa beans, on the other hand, have a much longer history. Archaeologists have noted that the earliest recordings of cocoa can be dated back to around 1900BP found in Mexico. The Aztecs and Mayas revered this drink, and it said that it was used during rituals.

Cortez is said to have brought it to Spain in the early 16th Century. Once in Europe, it became a favorite amongst the wealthy and only became available to ordinary people around the 18th Century.

Harvest to Roast: Coffee and Cocoa Beans – the In-Between

Coffee beans are processed in a few ways: dry, wet, anaerobic, honey, etc. These processes still require the removal of the beans from the pulp; then, the different techniques are used before the beans are placed in the sun to dry and remove moisture. After drying, they are milled, husked, cleaned, graded, and polished.

After the cocoa bean pods have been harvested, the beans are removed and placed inside large wooden containers and covered with banana leaves while fermentation occurs. This process can take anywhere from 2-7 days or even up to 10 days.

The Different Roasting Processes of Coffee and Cocoa Beans

The coffee bean is roasted at a much higher temperature than the cocoa bean, with temperatures exceeding 400 F. Coffee beans prefer a hot and fast roasting approach. High temperatures are required for the caramelization of sugars in the bean and pyrolysis for the darker roasts. Due to the high heat, the coffee beans’ flavor will develop quickly.

On the other hand, cocoa beans prefer a slow and low-temperature roast, with temperatures ranging from 250 F – 275 F. Normally, roasting lasts between 30 – 90 minutes. They also require the acetic acid, a result of the fermentation process, to be driven off.

The similarities between the two roasting processes are that they use a rotating drum roaster and require rapid cooling to stop the roasting process. They will both also lose quite a significant amount of weight in the roasting process. After this cooling, the coffee bean will shed its “chaff,” a paper-thin husk. In comparison, the cocoa bean will require further processing called “winnowing” to remove its outer shell.

Coffee beans and cocoa beans have some distinct differences. Starting with how they are grown, coffee in fruit coming in a pair of two beans, and cocoa in a pod coming in groups of 30 – 40 beans. Their appearance, taste, and size also differ.