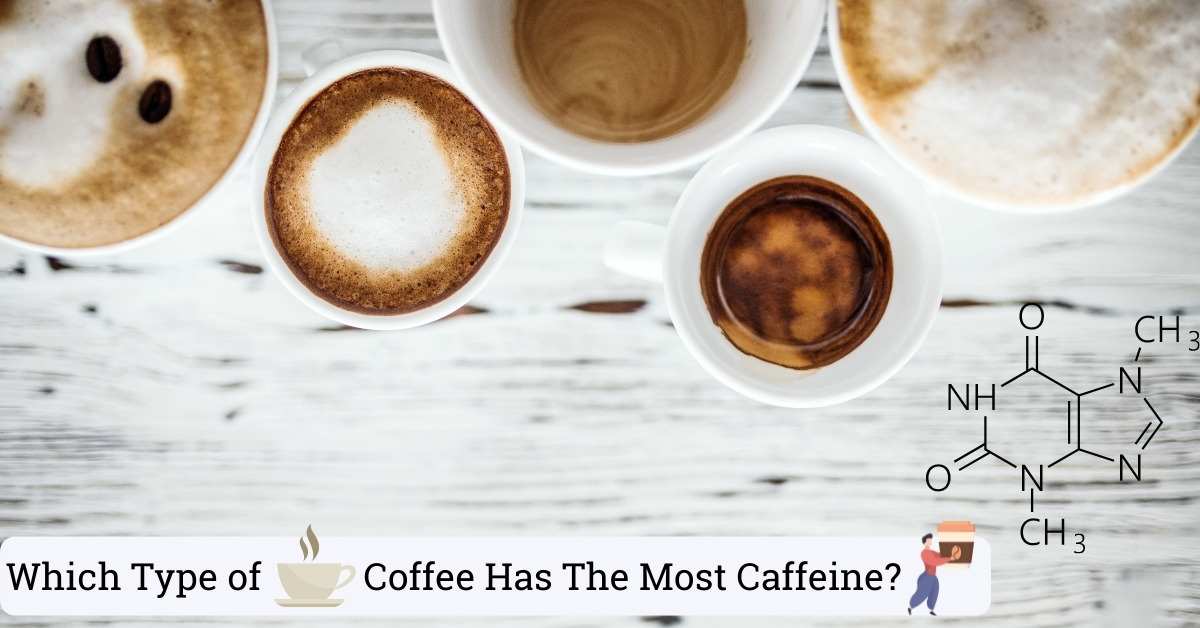 Many of us love to start the day with a steaming mug of coffee. Sure, we love the nutty taste of the roasted beans, but the caffeine hit is what we crave. So which type of coffee has the most caffeine?

Coffee lovers should put their preference down to the taste and not the caffeine content. If you enjoy coffee but would like to cut down on your caffeine intake, decaffeinated coffee may be the best choice for you. This article explains everything you need to know.

Arabica and Robusta are the most commonly used beans, and this is where the difference in caffeine content lies.

Arabica beans are the more expensive of the two and are often used in coffee houses and luxury brands sold in grocery stores. This type of bean is popular due to its low amount of caffeine low acidity, and generally, it is better tasting.

Many coffee blends include both Arabica and Robusta beans to keep costs down. But a blend made from 100% Arabica beans is hard to beat.

Arabica beans are the product of the coffee cherry grown in a coffee plant known as the Coffea Arabica. These coffee plants can take around seven years to mature and grow best in high altitudes.

The coffee cherry produces one or two beans per cherry. These beans are then picked, packed, and shipped to the consumer.

Robusta beans have a high caffeine content, which is why they have a bitter taste. The bitter taste isn’t all that bad, though some coffee enthusiasts feel it adds depth to the drink.

This type of bean is cheaper to grow and sell, so it is used in cheaper blends such as instant coffee. Robusta beans are pretty tasteless, but the high amount of caffeine is a great selling point.

Robusta beans are produced by the Coffea Canephora coffee plant. This type of bean is renowned for its high caffeine content. It is the second-largest commercially grown coffee plant.

Other types of beans include Liberica and Excelsa beans. Liberica beans are pretty unique in shape, and their taste can be described as smoky, floral, and fruity.

Excelsa beans are classified under the Liberica family but taste quite different and are extremely low in caffeine.

Fun fact: Coffee plants are grown between Capricorn and the Tropic of Cancer in an area known as the Bean Belt or the Coffee Belt.

The way the beans are roasted gives a good indication of how much caffeine your coffee will have.

Know-it-all coffee lovers may argue that the darker the roast, the more caffeine. However, this is simply not true, and here’s why.

Again, it could be argued that light roasts contain more caffeine due to the roasting process.

The caffeine content between the two is minimal if we drink a cup of each. Lightly roasted beans offer a more citrusy overtone and do not taste as rich as dark roasted beans.

Did you know? The most expensive coffee in the world is Black Ivory Coffee. Arabica beans are consumed by elephants and then collected from their waste! Black Ivory Coffee is rare and is sold in luxurious hotels and resorts worldwide. You can purchase this coffee for your personal consumption at a price of $2,200 per kilo!

We’ll take a pass, thanks!

What is The Science Behind The Roasting Method?

The act of roasting the beans has minimal impact on how much caffeine a bean contains. Beans expand during the roasting process, which makes them larger.

One study showed that roasted beans contain more caffeine in volume. Yet, they lose around 90% of their water content when roasted.

To summarize, there is not a big difference between the two when comparing cup for cup. Thus, it is best to consider how the coffee tastes rather than caffeine content.

The way your coffee is brewed may also have an impact on how much caffeine it contains.

Let’s start by taking a look at different brewing methods.

This is a high level of caffeine and happens when the compounds in the beans are extracted through the constant infusion of hot water.

Espresso has a similar amount of caffeine. This happens when pressurized water passes through finely-ground coffee.

This type of brewing method can be achieved in two ways; the pour-over method or the drip coffee method.

The quicker the water flows through the coffee ground, the more caffeine your cup will have.

Generally, a cup of filtered coffee has around 60-100 milligrams of caffeine.

It is essential to also look at the size of the beverage. A 1.5 oz cup of espresso has roughly the same amount of caffeine as an 8 oz cup of filter coffee.

Using an Aeropress to brew your morning coffee produces 50-70 milligrams of caffeine per 4 oz of coffee.

It uses air pressure to push the brewed coffee through a sieve. This results in a rich, smooth drink that is not too strong. To make a more concentrated cup of coffee, try steeping the coffee for longer than the recommended 30 seconds.

As mentioned above, one shot of espresso does not contain as much caffeine as you might think. Therefore, a double espresso extracted from a coffee machine may be the drink for you if you want that morning buzz.

Below is a table of the different types of beverages containing coffee.

As you can see, a cup of cold brew coffee or drip coffee has almost as much caffeine as one shot of espresso; it is the size of the drinks that differ.

Don’t worry too much, though; there are only around 2-4 milligrams of caffeine in a cup of decaf. If you are trying to abstain from coffee, this small amount of caffeine is entirely safe to consume.

For a drink to be deemed ‘decaffeinated’, 97% of the caffeine must be removed. Hence, there are still trace amounts. Removing caffeine involves treating the beans with solvents, water, or carbon dioxide. They are then roasted almost caffeine-free.

But does the rinsing of the beans wash away the flavor? Coffee lovers around the globe will argue that decaffeinated coffee is pretty bland. And they’re not wrong!

Decaffeinated coffee is a good choice if you are trying to cut back on your caffeine intake.

What is Caffeine and Why Do We Love It?

So what is it about coffee that we love? Is it simply the taste, or are the side effects the real reason we crave that morning cup?

Caffeine stimulates the central nervous system leaving drinkers with a temporary buzz. This feeling often leads to us craving more.

In plants, caffeine acts as a deterrent to pests and is the reason why coffee plants growing in high altitudes have less caffeine content due to a lack of bugs or pests.

Caffeine found in coffee makes up around 0.1% of its composition. You would have to drink a LOT of coffee to overdose on caffeine. (Something we don’t recommend testing out!)

Based on this information, it is safe to say caffeine consumption in moderation is more than safe.