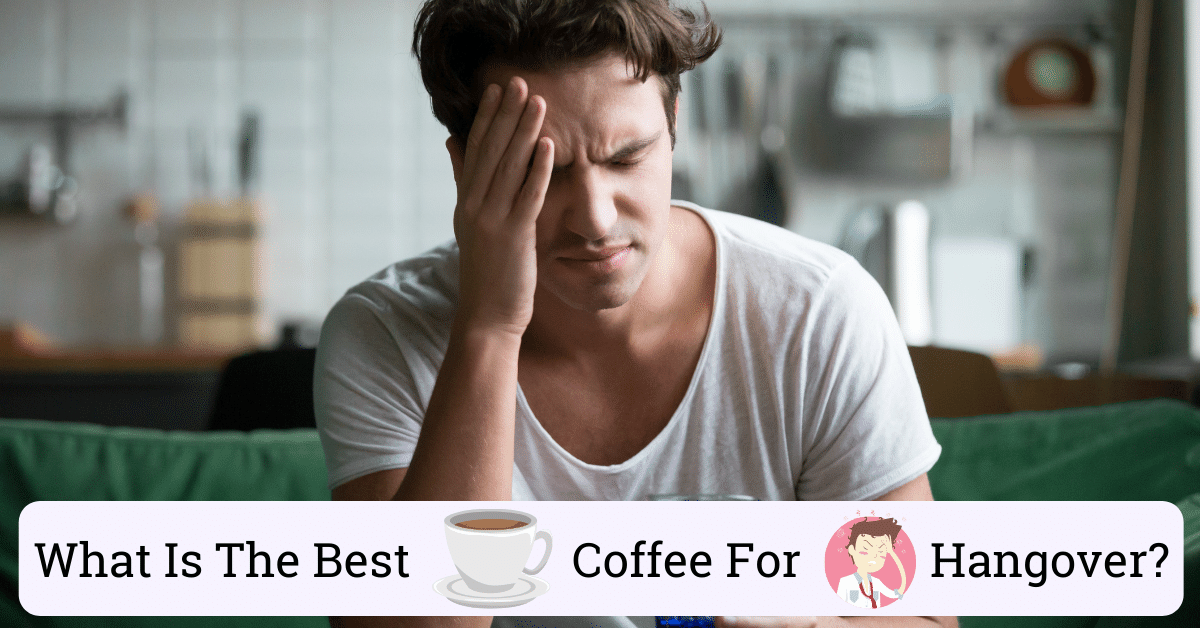 The best coffee for a hangover is black. While any coffee will do, even instant, the better quality the bean, the better it is for your liver. If your stomach can’t handle black coffee, use some milk. However, avoid all sweeteners, as this makes more work for your liver.

Until pretty recently, scientists thought the only thing coffee did for a hangover was prevent coffee drinkers from having a coffee withdrawal headache on top of their hangover. Well, and hydrate you, as black coffee is mostly water. However, new studies have revealed that coffee actually helps your liver.

Why Black Coffee Is Best For Hangovers

When you have a hangover, the recommended coffee is black coffee. But why black coffee and not, say, a double mocha lait frappé? After all, both have caffeine in them. Caffeine is the ingredient that helps block adenosine, which is responsible for the alcohol-induced headache. So isn’t any form of caffeine helpful?

Black coffee is mainly made up of water, easily 98%. The biggest problem when a person is hungover is that they are dehydrated. Thus, dehydrated people require water. It used to be believed that only water counted towards your eight glasses a day, but that’s no longer true. Coffee and tea do count towards your rehydration.

So yes, while waiting for your morning hangover coffee to be ready, feel free to sip water. But drinking black coffee will add to your much-needed hydration too.

Your liver is put through a hectic workout when you drink alcohol, and some of its cells have died (sorry, cells). So your liver doesn’t need more to do, such as processing sugar which, like alcohol, can lead to liver disease. Nor do all alternative sweeteners leave your liver alone. Thus, leaving all sweeteners out of your hangover coffee is best.

Can I Add Milk To Hangover Coffee?

If your stomach can’t handle black coffee, then it is best to use milk. No point in drinking coffee for your hangover if you can’t keep it down.

The reasons why, ideally, black coffee is better than coffee with milk is:

That said, milk isn’t reducing the water content of your coffee by a lot. Milk is, on its own, 87% water.

Nor are you adding tons of sugar to your coffee with a standard dollop of milk. But if you order a milk-heavy coffee beverage, such as a latte that averages 10 ounces of milk, then the sugar content shoots up. In 8 fluid ounces of milk, there is an average of 12 grams of sugar.

Is Stronger Coffee Better For A Hangover?

Many people have opinions on what strength coffee is best for a hangover. However, the research showing benefits to drinking coffee for a hangover all seem to suggest people are drinking the same strength as they usually do. The only difference would be reducing or eliminating any additives, such as sweeteners and milk.

It’s tricky because caffeine can give people a headache if they are not used to drinking it or are drinking it in much larger quantities than normal. So, if you are a person who sometimes drinks 3-5 cups a day, sure, having 5 cups on your hangover day might help. You might also find a slightly stronger cup of coffee helps.

But if you are not a big coffee drinker and suddenly slam back an expresso, you might not get the positive results you were hoping for. So it might be much wiser to try very weak coffee. Similarly, if you usually only drink 1-2 weak coffees a day, it is probably best not to chug four strong cups. You don’t want to swap one kind of headache for another.

Is Instant Or Ground Coffee Better For A Hangover?

As we mentioned earlier, caffeine helps block adenosine, which begins with the chemical acetate. So while people do debate which roasting methods are healthier, and some believe freshly ground coffee is healthier than instant, when it comes to blocking adenosine: you need caffeine.

Interestingly, even the studies that claim that coffee helps your liver and reduces hangovers, such as this one from 2021, showed positive results for any kind of coffee, including decaffeinated. However, in the same study, those who drank ground coffee had the best results, thanks to ground coffee having higher levels of kahweol and cafestol.

Is Decaf Coffee Good For A Hangover?

Decaf coffee might help a hangover. Unfortunately, information is scarce on the subject. What we do know is that, like regular coffee, decaf coffee is mostly water. Thus, decaf coffee does help hydrate you. Getting rehydrated helps the body recover from a hard night of drinking. Also, not adding milk or sweeteners to your decaf would make less work for your liver.

Decaf coffee, however, does not have caffeine in it. Thus, it will not help block adenosine, the chemical that is primarily blamed for the hangover headache.

When it comes to coffee protecting your liver and thus, reducing the chances of a hangover or at least its intensity, decaf coffee was shown to be beneficial. But the benefits were shown for people who regularly consume decaf, not for people drinking it only because they have a hangover.

There are Swiss Water processed decaf brands out there for those who want the benefits of ground coffee and are not fans of other decaffeination methods. Examples include Verena Street, No Fun Jo,  and Cooper’s Cask Ethiopian Ground. However, the studies did not state if the decaf drinkers that benefited were drinking instant or ground.