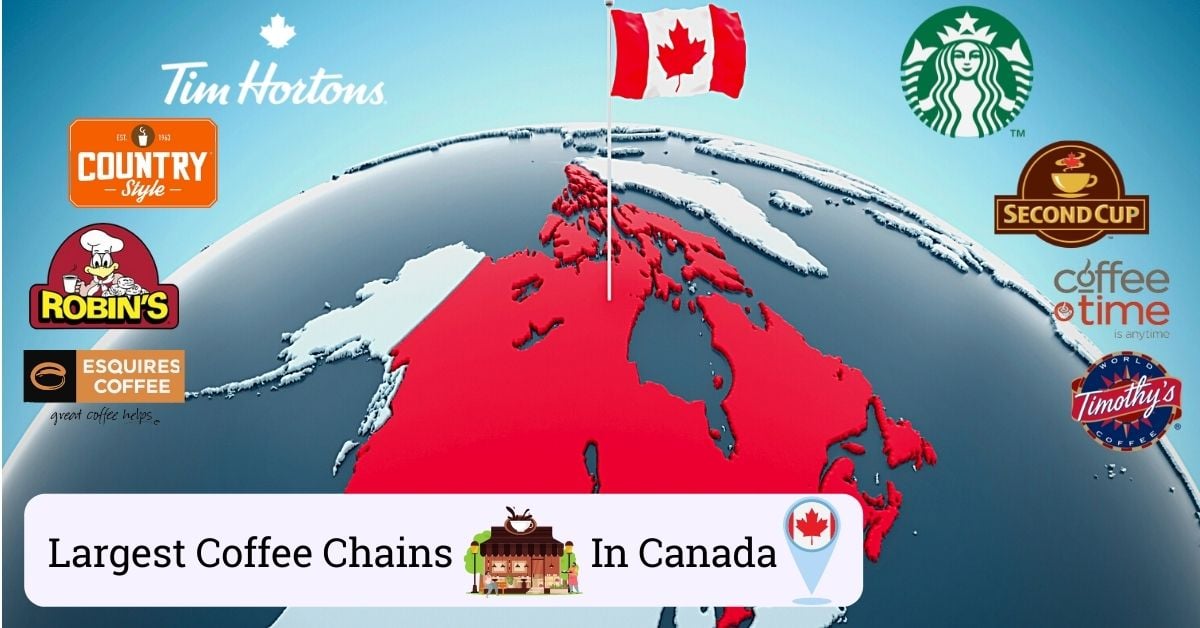 Canadians are hardy and know how to make the most of difficult winters, which is why there are so many diverse coffee shops and places to socialize to keep warm. Coffee shops, including franchises, have a substantial consumer market in Canada. That said, what are some of the largest coffee chains in Canada?

Canada’s major coffee franchises represent coffeehouses, shops, cafes, and other concepts. These coffee franchises will provide their franchisees with established expertise, strong brand awareness, and ongoing and consistent support. So, let’s take a closer peek at who they are and what they represent.

8 Of The Largest Coffee Chains In Canada

The spread and market share of coffeehouses in Canada are cataloged in this list of largest coffeehouse chains. That said, this list does not include the numerous businesses that run coffee shops within retail facilities, such as bookshops and department stores and restaurants, and convenience stores that sell coffee.

In addition, they have a lot of clout in the global coffee economy because they establish commodity pricing, maintain value chains, and promote emerging economies. So, starting with Tim Hortons, here’s what footprint these largest coffee chains have in Canada.

Tim Hortons, dubbed “Canada’s Favorite Coffee,” is known for its widespread presence in the country, having over 4,200 sites as of 2022.

This café, which serves brewed coffee and specialized espresso beverages as well as breakfast sandwiches, doughnuts, and other baked items, is guaranteed to satisfy your thirst. They sell everything from entire beans to single-serve coffee cups for Keurig single-serve Tassimo machines in grocery shops.

At the end of 2018, it operated 4,846 quick-service restaurants and coffee shops in 14 countries. After the first endeavor in hamburger eateries, the firm was launched in 1964 in Hamilton, Ontario, by Canadian hockey stars Tim Horton and Jim Charade.

Horton formed a partnership with investor Ron Joyce in 1967, and following Horton’s death in 1974, Joyce took full ownership of the company. Furthermore, she grew the business into a multibillion-dollar enterprise.

The company declared the closing of its US headquarters in Dublin, Ohio, in May 2015, and during that time, the company had 127 employees. This location was a holdover from the company’s previous merger with Wendy’s, which is also situated in Dublin, and Tim Hortons changed presidents for the second time in August 2016.

Furthermore, by the end of 2016, Tim Hortons had 683 locations in the United States, with a total yearly sales of $3.00 billion.

It’s not love at first sight, but Tim Hortons has a cult following among Canadians, leaving Starbucks in the dust with just 900+ company-operated stores in Canada. As a result, it might surprise you to find that Canada is in fourth place in the world’s greatest per-capita market for Starbucks.

Starbucks is the world’s third-largest fast-food and coffee shop chain, ranging from Japan to Costa Rica. There are a lot of lovely Starbucks cafes in Canada that aren’t like the ones you’re used to seeing on every street corner.

You could even forget you’re spending $5 for a cappuccino because of how beautiful they are, whether they have a lot of room, velvet curtains, or mid-century furniture.

According to Quartz magazine’s research back in 2014, which combined data from Starbucks and the OECD to establish which nations have the most Starbucks shops per person, the United States has the most.

Canada, at that time, was in the top spot, with just under 40 Starbucks shops per million people. That was more than Starbucks’ home nation of the United States, with 36.25 stores per million inhabitants.

However, that took a major turn over the years, with the US claiming back its status and currently sitting with 8,947 company-operated stores, according to Statista’s records in 2021.

The first County Style debuted in Toronto in 1963, offering a delectable mix of outstanding coffee and over 50 types of freshly baked doughnuts, all served in a welcoming atmosphere. Country Style currently has a large selection of freshly baked items and a breakfast and deli lunch menu that is available all day.

They provide a variety of restaurant ideas, including standalone, shopping malls, and fuel/convenience stores. Furthermore, they are still looking for additional franchise partners to help them expand across the country.

In January 2006, Ontario had 120 “traditional” sites. In addition, over 420 “non-traditional” venues may be found in places, including gas stations, convenience shops, arenas, and movie theaters.

In 2001, coffee accounted for more than 70% of all consumer purchases. Country Style operated over 1000 locations in Ontario, Western Canada, Prince Edward Island, New Brunswick, and Nova Scotia under the Country Style/Bistro moniker in 2001.

Second Cup Coffee is the fourth-largest specialty coffee store in Canada. Since its humble beginnings in 1975 as a kiosk in a shopping mall selling solely whole bean coffee, they have worked hard to achieve its aim of being Canada’s preferred specialty coffee brand.

Second Cup began as a coffee kiosk selling specialty coffee beans and has grown to be a coffee shop and café with over 300 locations across Canada.

They have their own assortment of coffee beans and processing procedures. In addition, they provide espresso-style beverages, as well as a variety of cakes and pastries, as you’d expect from a coffee business.

Mississauga, Ontario, is where the company’s headquarters are located. Hot and cold drinks, pastries, snacks, pre-packaged food items, hot and cold sandwiches, and drinkware, such as mugs and tumblers, are all sold at its outlets. Furthermore, it has expanded to over 26 other countries.

Next, we have Robin’s Donuts in fifth place among Canada’s largest coffee chains. Robin’s serves the best coffee and other specialty beverages like their iced cappuccino. Robin’s also serves all-day breakfast and freshly baked, handcrafted baked products, such as donuts, muffins, and other baked goods.

Robin’s has risen to become one of Canada’s top-grossing coffee chains since its inception in 1975. With a presence in each province, its 160+ stores stretch from British Columbia to Newfoundland and Labrador.

Canadians have returned throughout the years because of their pleasant ambiance and excellent cuisine. Robin’s locations range from drive-through kiosks to full-fledged restaurants.

“Robin’s Donuts” was founded by Harvey Cardwell and George Spicer in 1975 in Thunder Bay, Ontario.

Because of the expanding number of alternative new menu items, Robin’s Donuts produced a new logo in 2015 that removed the word “Donuts” from the name.

Isn’t it true that there’s never a bad moment for coffee? Coffee Time is a great place to go if you agree with this viewpoint. This coffee chain, which started in Bolton, Ontario, has expanded to 100 stores across Canada and has another 200 stores overseas in Greece, Poland, China, and Qatar.

Sandwiches, donuts, and other delights are available, as well as coffee beverages and icy smoothies. If you get the chance, try a Chocolate Coolio shake with a maple glazed doughnut, it’s fantastic!

Coffee Time is a Canadian coffee and snack restaurant franchise based in Scarborough, Ontario. Coffee Time has most of its stores in Ontario and Alberta, where its eccentric cafés sell coffee and other specialty beverages, baked goods, breakfast sandwiches, deli sandwiches, and soup.

Tom Michalopoulos created Coffee Time in 1982 in Bolton, Ontario. Before franchising in the late 1980s, Tom ran the original outlets on licensing agreements.

Two ambitious 24-year-old business graduates in North Delta, Canada, 29 years ago founded the first Esquires. What is it that they want? To create a global family of businesses united in their desire to provide outstanding coffee and cuisine to their communities.

Esquires, commonly known as Esquires Coffee or Esquires Coffee Houses, is a Canadian coffeehouse chain with over 60 locations and 70-plus locations in the United Kingdom, Ireland, Portugal, the Middle East, China, and Australasia.

The firm was founded in 1993 by Doug Williamson and Gary Buckland in Canada; however, the intellectual property and trademark rights are currently controlled by Cooks Global Foods Limited in New Zealand and Retail Food Group in Australia.

Lastly, Timothy’s World Coffee, which is most recognized for its presence in the home brewing coffee industry, also operates 50 standalone retail shops in Canada that sell freshly brewed beverages as well as home brewing coffee pods. They have anything from coffee and tea to rich hot cocoa that you can brew in your Keurig machine.

Try the hot butterscotch chocolate at the shop for a unique seasonal drink, or pick up a box of toasted coconut & Salvador coffee Keurig blend to make at home.

Timothy’s was created in 1975 by Timothy Snelgrove and his wife Teresa Snelgrove as a reseller of quality roasted coffee beans. Snelgrove founded the company as a business school project while studying at the University of Western Ontario.

The firm expanded its retail offering to include brewed coffee as it grew. Timothy’s initial location was in a shopping center in London, Ontario.

Ian and Becky McKinnon bought Timothy’s in 1986 and expanded the retail shops while also launching a wholesale coffee operation. Timothy’s also partnered with Keurig as a roaster and began manufacturing single-serve K-Cups for use in Keurig’s single-serve brewers.

Through a wholly-owned company called ThreeCaf Brands Canada Inc., Bruegger’s would also purchase Timothy’s partner eateries, Mmmuffins, and Michel’s Baguette. Timothy’s roasts and makes a variety of coffee forms at its own facility, which produces its own coffee beans.

As a result, the corporation provides a freshness guarantee and other corporate regulations. The Toronto roasting factory has been shuttered since 2015, and its operations have been integrated into the Van Houtte roasting plant in Quebec.

With so many excellent coffee stores spread across Canada, it’s hard to miss the chance to get your hands on a great cup of Java when you are out and about. However, with Tim Hortons taking the top spot by far, it’s difficult to spot a close competitor soon.

That said, even though Timothy World’s Coffee is currently in eighth place, it is a coffee shop growing in popularity that may just make a dent in the list of the largest coffee chains in the years to come.