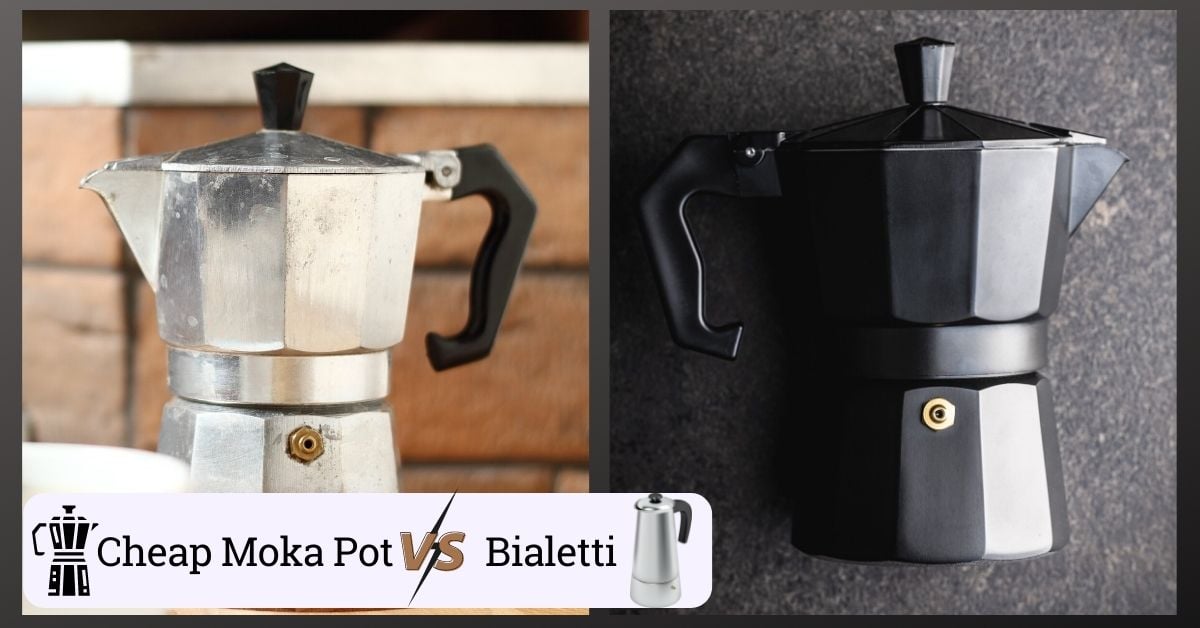 The Moka Pot is among the most iconic coffee brewers ever made. This brewer is unique, simple to use, and has become a favorite among coffee lovers throughout the globe. Bialetti is the original inventor of the Moka Pot, but several other manufacturers have developed their own versions since then. How do cheaper Moka Pots compare to the Bialetti original?

The Bialetti Moka Express is the best Moka Pot out there, and the cheaper versions of this brewer are simply not as good. Cheaper Moka Pots produce coffee that is less clear, less robust, poorly brewed, less extracted, and less flavorful than coffee brewed in the Bialetti.

Comparing the Bialetti Moka Pot to cheaper alternatives of the same type of brewer is important because the Bialetti can be an expensive brewer depending on where in the world you live. Let’s take the time to compare the original Bialetti with cheaper versions of Moka Pots to determine which is better and if the Bialetti is worthwhile.

The best thing to do when comparing a giant household brand such as Bialetti to other brands that may be cheaper or less well-known is to dive right in with a comparison of the product itself.

The Bialetti Moka Express is the original Moka Pot that was developed in 1933 and has been in production until very recently. Since this brewer was first developed, however, there have been several cheaper versions of the Moka Express developed to try and copy the original or provide a less expensive alternative.

This gives rise to the question of how the original compares to the alternatives, which leads us to compare the two according to well-defined parameters. These parameters of comparison are: build quality and durability, ease of use, brew efficiency, and the ultimate taste of the brewed coffee.

Let’s get into the comparison to clearly define the differences between the name brand Moka Pot and the cheaper alternatives.

The first aspect of a Moka Pot that you notice when you handle it is the build quality of the brewer. A Moka Pot that is made to a good standard of quality will feel robust in the hand, it will assemble and disassemble easily without any cross-threading, all of the components of the Moka Pot will fit together well, and nothing on the brewer will be loose when handles.

These are good identifying marks of a good quality Moka Pot, and the Bialetti Moka Express always hits all of them. Cheaper alternatives can be well made, but the very cheap Moka Pot versions are often very poor quality.

Poor build quality means that the Moka Pot will brew less efficiently, and the coffee that is produced will not be as good as it should be.

Cheaper Moka Pot versions tend to be more difficult to use than the original Bialetti and tend to be less consistent. Using a Moka Pot is already not the easiest way to brew a cup of coffee, but the difficulty of using sub-pare brewers makes it even more challenging.

The Bialetti alternatives tend to be more difficult to use because they are not made to uniform quality standards and are often made of materials other than the aluminum that Bialetti uses.

Using a Moka Pot that is made from poor quality metals or materials that do not transfer heat efficiently makes the brewer much more challenging to use.

The Bialetti Moka Express is still the easiest Moka Pot to use when compared to all of the cheaper alternatives.

The idea behind the Bialetti Moka Express was to make an efficient brewer that produces good coffee using the pressure of steam in as little time as possible. This means that the original Moka Pot design is incredibly efficient and is purpose-built with every tiny detail in mind to make the best coffee possible.

Cheaper versions of the brewer are not made with the same efficiency in mind and therefore tend to be made with shortcuts that reduce efficiency.

For example, cheaper versions of the Moka Pot have larger and fewer filter holes between the base and the brew chamber. This means that water flows through the brewer more quickly and reduces the extraction of the coffee, which reduces brew time but also drastically decreases brew efficiency.

These shortcuts in the manufacture and quality of the cheaper brewers result in coffee that is sub-standard and not as good as a Moka Pot should produce.

The ultimate deciding factor regarding which brewer is best, the original or the cheaper alternatives, is the coffee that the brewers produce.

It is possible to use some cheaper brewers to produce decent coffee, but the truth is that the best Moka Pot coffee comes from the original Bialetti Moka Express.

The cheaper versions of the Moka Pot produce coffee that has significantly less clarity, less depth of flavor, coffee that is under-extracted and muddy at the same time, and it just does not taste as good as coffee brewed with the Bialetti.

At the end of it all, while cheaper Moka Pots may seem attractive due to their lower price point, the truth is that there is no Moka Pot better than the Bialetti Moka express. This Moka Pot is the original iteration of this type of brewer and is considered to be the best Moka Pot for a reason.

The Bialetti Moka Express brews better coffee than any other Moka Pot, regardless of size, and it is the only Moka Pot that should be considered by people who really care about the coffee that they drink.

Go out and get yourself the real deal to discover the difference for yourself, and you will never use a cheap Moka Pot again.