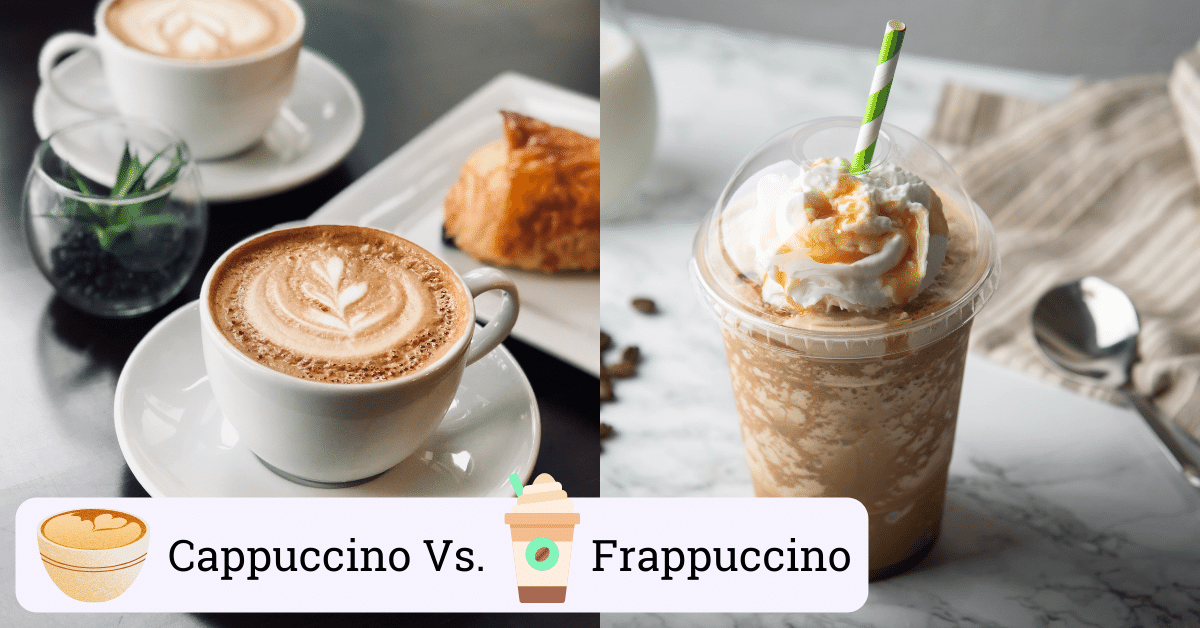 Cappuccinos and Frappuccinos are two popular specialty coffees that are easy to confuse. As caffeinated beverages, a cappuccino and a Frappuccino will have many similarities, but there are also several differences between the two. This comparison will help you make an informed choice between the two in your future orders.

Coffee drinks are always prepared in specific ways, blending different ingredients, using different roasts, grain sizes, and different brewers. So, hot cappuccinos and iced Frappuccinos are entirely different beverages, despite their similar names and their shared status as caffeinated drinks. Understanding these differences will help you pick out which beverage is perfect for your pick-me-up every morning.

What Is A Cappucino?

It is topped with milk foam (froth), which can be artistically decorated.

Traditional cappuccinos typically consist of 150ml (5oz) of espresso, 180ml (6oz) milk, and milk foam. However, the sizes and ratios of cappuccinos can vary in subtle ways in different regions and from barista to barista.

However, maintaining consistent espresso to milk ratios is essential, or you could wind up with a completely different blend.

What Is A Frappuccino?

Frappuccino is a blend of coffee that Starbucks has trademarked but has been imitated by coffee makers worldwide. The brand is now synonymous with sweetened, iced coffee blends paired with various ingredients, including Starbucks branded syrup. They are topped with whipped cream, along with different spices.

The various versions of the Frappuccino include decaffeinated, créme, non-dairy, and modified options that include flavored syrups, chocolate chips,  and other flavored powders. Frappuccinos have also formerly been offered in juice blends.

One significant advantage that the Frappuccino has, as an iced coffee drink, is it can be bottled and sold in convenience stores and vending machines.

The Differences Between Cappuccinos & Frappuccinos

Also, note that Frappuccinos are only found at Starbucks, but you will see imitations of them elsewhere.

Cappuccinos should be served steaming hot, with a fresh shot of espresso, steamed milk, and milk foam in a 1:4 espresso milk ratio.

The difference in temperature makes for two very different drinks. And, due to the high sugar and fat content in Frappuccinos and the relatively bitter taste of a cappuccino, those different tastes are exacerbated.

Most people enjoy their Frappuccinos with coffee, but Starbucks offers non-coffee, decaffeinated options as well. Many people will go for the decaffeinated Frappuccino when looking to cut back on their coffee addictions.

The fundamental ingredients in a Frappucino can either be coffee or créme, and you can cut the former out in favor of the latter. And there are many options in terms of the flavored powders used for Frappuccinos, ranging from espresso shots to chocolate chips to juice blends and many more.

If you want to know which option between a cappuccino and a Frappuccino is worse for your waistline, there’s no contest. Frappuccinos are laden with sugars and syrups, with a Mocha Cookie Crumble Frappucino containing a ridiculous 76g (2.6oz) of sugar! That’s the equivalent of 15 teaspoons of sugar.

Cappuccinos are, however, just milk and espresso shots, with no sugar or additives, which you can add if you want to.

Espressos (the base of a cappuccino blend) contain almost zero calories, and the only calories you’ll find in a cappuccino are from the milk. It amounts to approximately 36 calories in a single cappuccino, compared to the 400 calories in a vanilla bean Frappuccino.

4. Cappuccinos Have A Specific Recipe; Frappuccinos Are More Flexible

Making alterations to a Frappuccino recipe will not result in any significant differences to the end product. However, the formula is specific with cappuccinos, and adding more milk or coffee will result in a completely different beverage.

To illustrate this point, one need only look at the vast array of flavors of Frappuccinos that you can order. The only ingredients invariably found in Frappuccino recipes are ice, heavy cream, and whipped cream.

A Frappuccino can work with French press coffee, Moka pots, and just about anything else with a potent brew. Cappuccinos, on the other hand, have to be brewed with espresso shots. Frappucinos can also be made with cold brews, but the coffee taste will be far more subtle.

The Frappuccino was inspired by Greek frappes, which are brewed with instant coffees. Therefore, you have the freedom to mix things up with a Frappuccino.

6. Cappuccinos Are Smaller Than Frappuccinos

While the size of these beverages won’t always be consistent, cappuccinos will always be smaller than Frappucinos. Cappuccinos can range from 150ml to 350ml (five to ten ounce) cups, while the smallest Frappuccino size is 350ml (12oz).

In other words, a Frappucino can be twice the size of a cappuccino. However, this doesn’t mean you get twice the caffeine because other ingredients would dilute it and the ratios aren’t specific.

Can You Get A Frappuccino Anywhere Other Than Starbucks?

Frappuccinos are a registered trademark that gives Starbucks the exclusive right to sell them. They own the recipe as well as the brand. So technically, you cannot buy a Frappuccino from anywhere other than Starbucks, besides the ready-to-drink bottled Frappuccinos that you will find in grocery stores and vending machines.

However, similar, generic recipes are used at different coffee stores, and you can find other iterations of the recipe online. The drink will not be exactly the same as a Starbucks Frappuccino, but they can come incredibly close in most cases. Technically, copyrighting a recipe isn’t possible, and local coffee shops can just make minor alterations to the recipe for a unique but equally delicious blend.

Now that you’re familiar with what cappuccinos and Frappuccinos are, as well as the differences between them, you can feel far more confident about your next order and can experiment with a variety of tastes to find the perfect beverage for you!