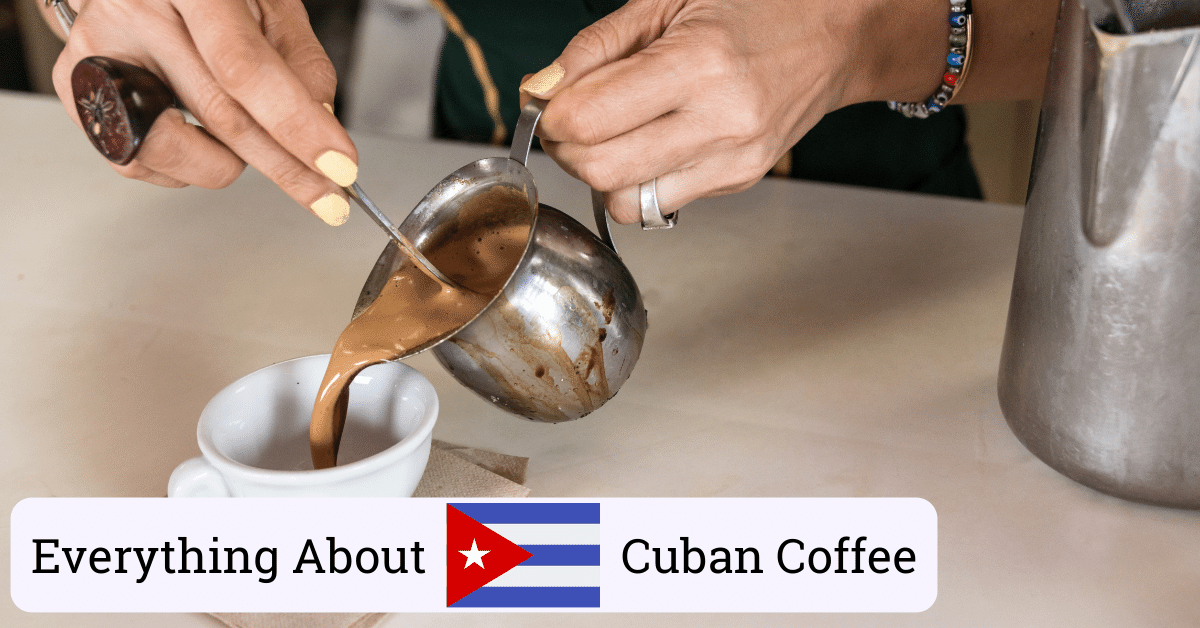 Besides being a favorite drink among many, coffee has formed an integral part of many people’s lives. From being a focal point in social activities – made to be enjoyed with family and friends – to representing cultural heritage; Here is everything you need to know about Café Cubano.

Café Cubano is a Cuban espresso that is sweetened with demerara sugar. Traditionally, it is made with dark roasted beans while using a Moka pot; however, different variations of this drink exist today. Additionally, Café Cubano is associated as a social activity drink.

What Is Café Cubano?

Café Cubano is a type of espresso that is sweetened with demerara sugar. Demerara sugar is sugar made from sugarcane that consists of large crystals. Café Cubano has traditionally been made using dark roasted beans and is usually brewed with a Moka pot – a stove-top espresso maker.

Espresso is added to the sugar and vigorously beaten until espuma (foam) appears.  Ultimately a sweeter and more dense result is achieved due to the heat process of the coffee-making. Afterward, the espresso is added to the espuma. The espuma then rises to the top resulting in a much stronger drink than many other coffees.

Although it is small, don’t let it fool you. Café Cubano can definitely pack a punch and is stronger than many other forms of coffee. So, although Café Cubano is regarded as a leisurely drink, there are added benefits such as a powerhouse of energy that will get you through the day.

Café Cubano is usually served in ceramic demitasse cups at home or in restaurants. Over time, drinking Cafe Cubano has become embedded in social and cultural activities in both Cuba and Cuban-American communities.

You will often see people drinking Café Cubano during breaks in Cuba as well as in Miami, Florida Keys, and Tampa.  The drink is usually drunk in the morning or with accompanying meals in Cuba. In addition, the name café Cubano can be used to refer to other drinks that use Cuban espresso as the main ingredient.

Café Cubano, also known as cafecito or Cuban espresso, is a type of espresso that originated in Cuba. Cuba has a long history of coffee production, and given its history, it is not at all surprising that this beloved drink finds its origins there.

José Antonio Gelabert introduced the first coffee plant to Cuba in 1748. By 1791, newer and better coffee production methods were introduced by French colonists fleeing the abolition of slavery in the Haitian Revolution.

Cuba mainly produces arabica and robusta beans, and over the years, coffee production steadily grew along with its popularity. By the mid-nineteenth century, coffee grew to have as much economic importance as sugar. By the 20th century, Cuba’s coffee boom led them to become the leading exporters of coffee worldwide.

Over 20 000 metric tons of coffee beans were exported by Cuba in the mid-1950s at premium market prices. And then, in 1960-1961, Cuba reached a record number of coffee production of about 60 000 tons. However, this did not last very long as the country saw a significant decline in coffee production after the Cuban revolution in 1959.

Nevertheless, as Cuba saw a surge in coffee production, so did domestic consumption of this readily available crop surge. Café Cubano then became a standard form of coffee within Cuba.

How To Make Café Cubano

Cafe Cubano is a great drink of choice to have with friends or family. So have a cup and catch up with all the news, wonders, and politics of the day. Below we will show you a quick a simple way to make this Cuban favorite.

Prepare a serving of espresso according to the manufactures directions on your machine and brew espresso. If you want to accelerate the boiling process, consider using pre-boiled water in the bottom chamber of your pot.

Traditionally, Cuban dark roasted beans are the coffee beans of choice. However, some people substitute this with other bean varieties.

While you are waiting, spoon 1-2 teaspoons of sugar into the espresso or demitasse cup. You can alter the amount of sugar depending on how sweet you want your coffee.

Once your espresso is ready in the pot, add a few drops or one teaspoon of coffee into the sugar cups. Stir and whisk vigorously while the espresso continues to brew. The sugar/espresso mix should be of a thick consistency and slightly frothy. Repeat with the other sugar cups.

Add the remaining espresso into the cups while continuing to stir. You can add more coffee if you would like a stronger taste.

Listed below are other types of Cuban coffees commonly found and loved by many.

Café Cubano is a favorite drink among many. What makes it so unique is the method used for brewing and the espuma formed as a result. Cafe Cubano is commonly drunk with friends and families as a social activity rather than a means of a productivity booster. Its country of origin has also had a long history with coffee, and it’s no wonder that this drink (among others) originated there.