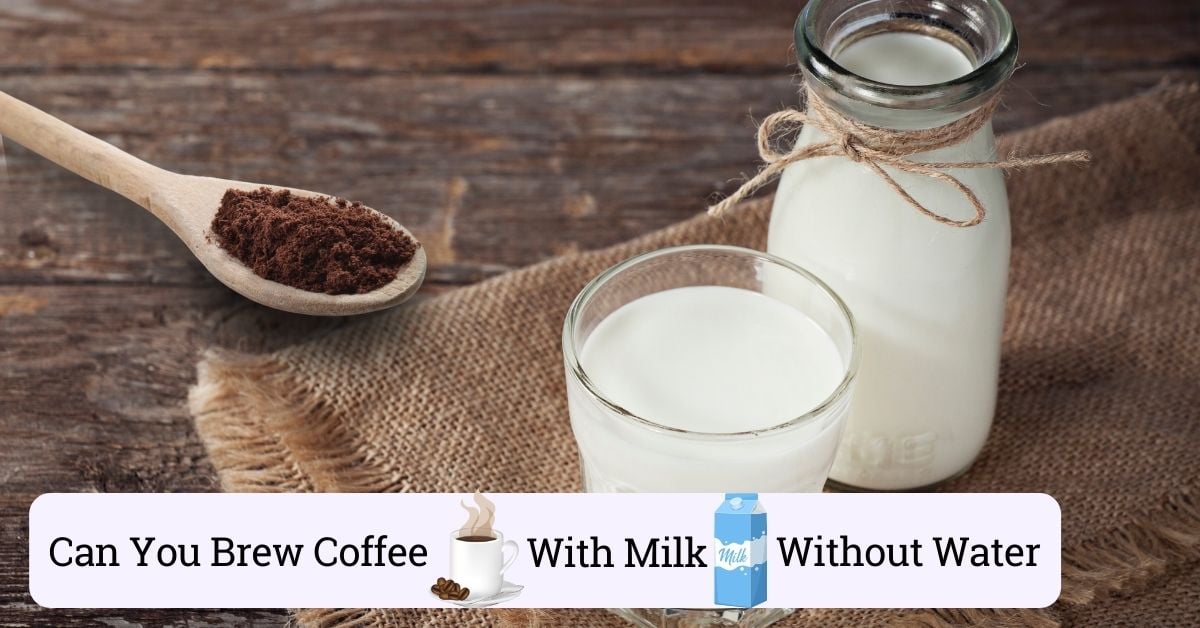 There are several various ways to brew delicious coffee drinks, and if you enjoy milk and coffee drinks, you may find yourself wondering if you can brew coffee without using water and use milk instead? If coffee and milk work well together, this process should be possible, right?

You can brew coffee in milk instead of water. This process only works with certain brew methods such as cold brewing, infusion, or immersion brewing. Never use milk instead of water in a coffee machine. Milk brews take a very long time to complete compared to water brews.

The process of brewing coffee is more complex than it may seem. There are a number of physical and chemical reactions that take place during a brew, and these reactions are quite delicate. Without achieving the exact right environment for the ideal cup of coffee, the coffee is likely to not taste as good as it should. Let’s talk about what would happen if the coffee was brewed in milk.

Can You Brew Coffee In Milk?

Brewing coffee is a process that has been around for hundreds of years. This drink is one of the most popular beverages anywhere, and more than 2-billion cups of coffee are consumed internationally every day.

The amount of coffee that people drink all over the world has led to some interesting brew experiments. One such brew experiment is brewing coffee with milk rather than water.

This seems like a reasonable idea, as coffee and milk combine very well with each other once the coffee has been brewed. However, brewing with milk rather than water can be a serious challenge, and it can produce terrible results if the wrong methods are used.

To answer the question directly, it is possible to brew coffee with milk instead of water. The process that is used for this brew must be very precise, and only certain brew methods will work well for this.

If the wrong method is used, you are likely to end up with a cup of disgusting curdled coffee-tainted milk that is undrinkable, and using milk in certain brew methods may even ruin your brewing equipment.

Let’s learn more about this process and find out when, where, and why brewing with milk is likely to succeed or fail.

As we have already mentioned, not every brewing process is likely to succeed when brewing with milk rather than coffee. Some methods are better suited for this, and other methods are likely to produce a terrible brew.

If you are considering brewing coffee with milk, be sure to consider the brew method carefully. Never use milk instead of coffee in brew methods that involve machines or pumps of any kind.

Using milk in a coffee maker or a device that has a water tank and a pump to deliver water to the brew will be entirely ruined if used with milk. The milk is likely to clog in parts of these devices, and I the milk is heated along the way, it will cook, curdle, and be stuck in the machine forever.

These methods allow the coffee to infuse into the milk without the milk causing damage to any brewing devices, and they expose the ground coffee to the milk for a longer time. This is key when brewing with milk, as milk is far denser than water and cannot be heated to the same temperatures for brewing as water.

Can Brewing With Milk Be Good?

There are various ways of brewing with milk, and those who have experimented with this process have reported somewhat pleasing results.

Some milk brewing methods are known to produce a tasty beverage, but it is not as strong nor as well developed as brewing coffee with water and conventional brew methods.

Coffee that is brewed in milk rather than water has a nutty, sweet, milky flavor infused with the taste of delicious coffee. This drink is quite smooth, easy to drink, and has a very mild, gentle overall taste.

If you are someone who enjoys milky coffee, this may be a good option for you. Black coffee can be very intense, and brewing with milk provides a lighter, sweeter, less offensive alternative if it is well made.

Why Milk Is Not Ideal For Brewing Coffee

The truth is, even if you are able to brew a decent-tasting drink with milk rather than water, milk is still not an ideal liquid for brewing coffee.

The reasons why water works so well for brewing coffee are that water heats very well without changing flavor or consistency, water does not heat above a certain temperature, and water allows soluble material to dissolve into it very easily.

Milk does not possess any of these qualities.

When milk is heated, the proteins and fats in the liquid cook and solidify. This means that milk cannot be heated very much before it starts to curdle. This temperature is well below the heat necessary to properly brew and extract coffee.

Milk is also very dense, and soluble material does not dissolve into it very well compared to water. The fats, proteins, and other molecules within milk do not leave much room for the coffee to infuse into it; this means that the brew will be very weak.

For these reasons, milk is not ideal for brewing coffee, but the process is technically possible. The brew must be done carefully so as not to heat the milk to the point where it begins to cook, and the brew must be conducted over a long enough time to allow the coffee to extract.

This means that the best brewing method for this is a long-term brew that begins with milk that is slightly heated and allowed to cool over time.

Brewing coffee with milk is possible, but it must be done very carefully, or the brew will ultimately taste awful. Understanding how coffee infuses into a liquid is vital, and once you find a way to get this done with milk, the drink can be quite good as a result.

If you want to give this brew a try for yourself, be sure to take the tie to find a method that works well for you. Do not rush into using any method that you think may work, but rather try some tried-and-true methods that have been known to work in the past.