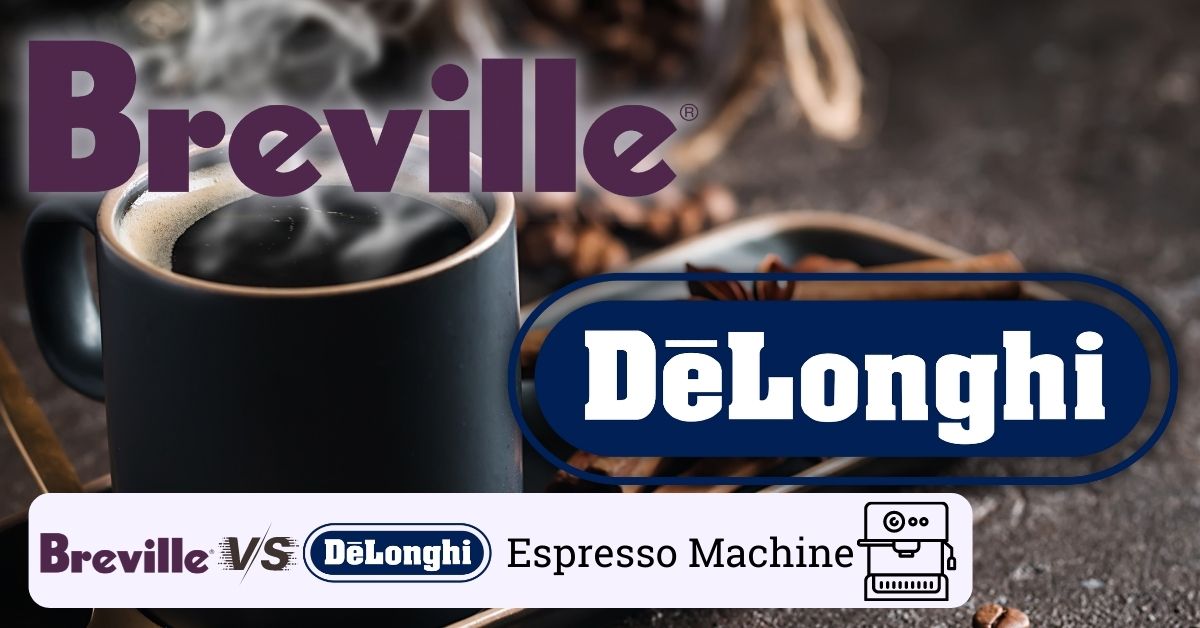 Two of the best-known espresso machines on the market today are Breville and DēLonghi, certainly in the entry-level market. Both make some of their range in China, and Nestlé selected both to produce certain models of the Nespresso Pod machines. That’s correct – the two companies make pod machines for the opposition, so they are clearly well-respected, but which one is better? Breville Vs. DeLonghi Espresso Machines. Let’s find out.

It’s impossible to decide between a Breville and a DēLonghi espresso machine, as they are similar in function and price. Each has pros and cons and makes good machines. Breville offers more scope, while DēLonghi assists the user somewhat. Longevity may be best in Breville – Innovations in DēLonghi.

This Australian-based company was founded before WWII (1932) and has also diversified into other kitchen appliances, all in the themed brushed-steel of their espresso machines. Unlike DēLonghi, Breville concentrates on manual units. Turnover in 2020 was U$624 million.

Since we don’t have enough space in a single post to compare all of the espresso machines, let’s take a look at a good entry-level machine from each company: Breville Barista Express and DēLonghi La Specialista, and see how they fare against one another:

The first product DēLonghi produced was in 1974 when they launched an oil-filled radiator which is still popular today, and electric fan heaters and catalytic stoves closely followed this. Then came a mobile air conditioner in 1986 and the acquisition of Kenwood in 2001.

A pump-operated coffee machine was produced in 1993, and in 2003, the first super-automatic espresso machine, the Magnifica, was built. Since then, they have acquired Braun and now produce many kitchen appliances, including hand-held blenders, air conditioning units, humidifiers, and of course, a variety of coffee machines. Global turnover in 2020 was reported as U$2.65 billion. Known as Sage BES875UK in Britain and Gastroback Advanced Pro S in Germany and several other countries for some unknown reason, rest assured the products are all the same. With its brushed stainless steel, dials, settings, and gauges, the Barista Express certainly looks the part and is a great entry-level unit.

The built-in burr grinder is perfectly adequate, and you honestly do not need anything better, as it provides a wide range of grinds with very little heat release into the beans. The tamper is supplied with the machine and has a magnetized port under the power switch from which to hang, so it is out of the way and (almost) never misplaced. (I manage to misplace everything!)

The disadvantage shared by all units that are not plumbed into mains is the potential for algae to form in the water tank. The 67oz tank is – like many units – out of sight at the back of the machine, so easily ignored. I’d suggest you remove and dry it overnight unless you are churning out coffees all day.

Similarly, you might want to avoid filling the hopper if you’re consuming less than 25 shots per day or thereabouts.

Temperature control is tighter than in many bigger machines. You can adjust the water temperature in increments of one or two degrees from 185º F to 205º F, which is very useful when experimenting to get the perfect shot. If you’re unsure, the default temperature factory setting is a good setting to use until you’re ready to experiment. Some guests will prefer a hotter expresso, and this feature will allow this for you.

The Breville produces good foam but takes too long to produce steam, in my opinion, although the resultant thick foam was pleasing. Lack of speed to produce steam is the downside of any machine that doesn’t have two heating systems, and I also had some water loss from the group head when steaming, which was irritating.

Double-walled filter baskets allow a shot of espresso to be produced with a credible crema, even when imperfectly prepared. In other words, this is like cheating on an exam, but with tasty results! Once you perfect these, go on to single-walled baskets (thankfully also provided) or, if you are experienced in espresso production, you can skip this step entirely.

The DēLonghi has more potential for improvement but a longer learning curve, though I felt it worth the extra U$100.00, which you will forget in a year. It is easier for beginners to conquer but has a very limited hopper grind range, which will frustrate users once they begin experimenting with different beans and roast profiles. With a dual heating system, the DēLonghi allows you to steam the milk and extract the shot at the same time, and since the patented steam wand is nicely set to the side, there is no conflict when doing so. The resultant milk is extremely tight and well-formed and some of the best I have seen from an automatic machine.

Dialing in the grinder is not as easy as one might imagine. Once it is done, there is almost the feeling of walking on eggshells around it, and if you plan to drink a dark roast in the morning and a lighter roast – or vice versa – you will struggle; at least at first.

Cleaning is easy because the coffee grounds never mix with the water inside the machine, which means mold is not a concern. However, all of the removable parts must be hand-washed, and there is no machine washing permitted with this unit, though cleaning only takes a few seconds anyway.

Very quiet for such a large home unit: No conversation killer here.

I wasn’t crazy about the auto-tamper, which is hidden. (Only the tamping lever is visible.) Until you get some experience with the machine, the puck is often either too loose or too tight, which can be a little frustrating. If the grinds are not perfectly level, you may have a tilted puck, leading to cracking and a poorly pulled shot.

If you want greater control over the entire brewing process and don’t want to be overwhelmed by all the functions of a fully manual espresso machine, the Breville Barista Express should be on your list.

Breville and DeLonghi are solid, reputable companies that genuinely care for their machines’ quality, but service seems to be where DēLonghi drops the ball. Many owners complain that their concerns are not attended to promptly and that repairs can take weeks.

No home barista is keen to have a service or repair take longer than necessary, and service – or lack thereof – can make or break our purchasing decisions.

Both companies make good machines with solid components, and both have comparable machines in the same price bracket with very little to choose between them. You can certainly do worse.