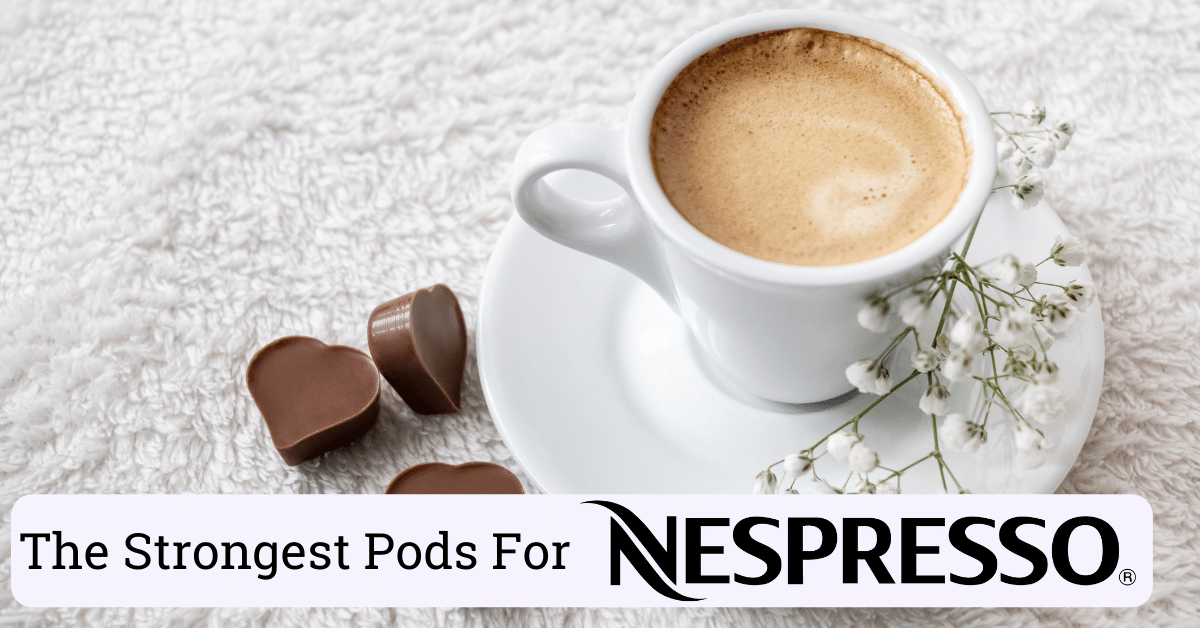 When it comes to coffee, especially when you are in for a long day, you have to make sure that your cup is quite strong to have the strength to take on whatever is in front of you. So, of course, only the best strongest Nespresso pods can help you get the energy you need early in the morning. That’s why I have listed the best strongest Nespresso pods available today: 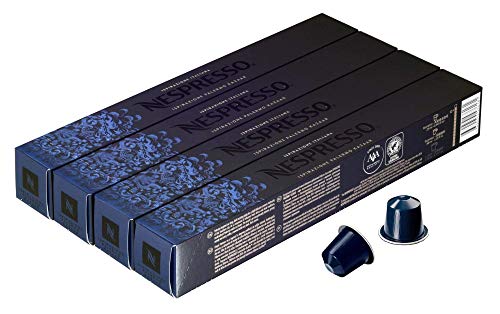 Nespresso OriginalLine (European Version) Ispirazione Italiana: Palermo Kazaar, 40 Capsules
$40.09 ($0.74 / Fl Oz)
Check Price on Amazon
We earn a commission if you make a purchase, at no additional cost to you.

If you are looking for a very intense pod coming from Nespresso, then the best should be the Nespresso Ispirazione Italiana Palermo Kazaar. Even Nespresso recognizes this as the strongest and most intense coffee in the entire Nespresso roster, especially if you factor in its intensity level of 12.

As intense as it is, there is no doubt that Kazaar is actually a very delicious coffee pod. You are going to get a full-bodied and bold coffee that is full of bitterness but has notes of syrupy sweetness and hints of pepper, all complemented by its amazing creamy texture. It’s like drinking a cup of hot cocoa that is bolder and fuller than any cocoa you have ever had.

And because Kazaar does have an intensity of 12, you should never doubt how intense this coffee is, as it is said to have a caffeine content of somewhere around 120 mg. So in that sense, it is a good coffee to have early in the day if you are looking for a good energy booster. 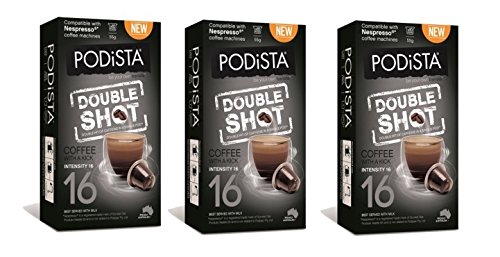 Podista Nespresso Compatible Capsules Double Shot Pods - Extra Intense - 30 Pods Check Price on Amazon
We earn a commission if you make a purchase, at no additional cost to you.

While Kazaar is the strongest pod that comes straight from Nespresso, arguably the strongest Nespresso-compatible pod you could find today is the Podista Double Shot pod. As its name suggests, this pod gives you two shots of espresso in one single serving, which is why it is as intense as it is.

The Podista Double Shot doesn’t really stand out in terms of its overall flavor profile as it gives you that standard dark roast espresso tastes that you will usually get from most espresso shots. But it does come with that rich crema that you should expect from a good espresso.

On top of how it has two shots of espresso, the Double Shot is naturally enhanced with guarana extract to make it an energy drink wearing the disguise of a coffee pod. But, of course, it has a recorded intensity of 16, and that number alone makes it the most intense the market has to offer. As such, only take this shot if your caffeine tolerance can handle it and if you want to keep yourself awake for extended periods of time. 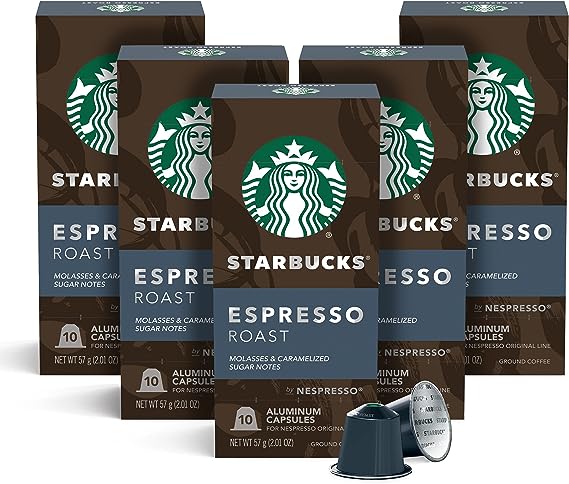 Starbucks by Nespresso, Espresso Dark Roast (50-count single serve capsules, compatible with Nespresso Original Line System), 10 Count (Pack of 5)
$35.87
Check Price on Amazon
We earn a commission if you make a purchase, at no additional cost to you.

If you are someone who is after that coffee shop experience in your strong coffee, then Starbucks gives you its Espresso Roast, which is one of the most intense pods that the world’s most popular coffee shop has to offer for Nespresso OriginalLine owners out there.

I really like this pod because, despite how intense it is, it comes with a dark taste that is perfectly complemented by the sweetness that comes from its caramel notes. In addition, it has a unique natural sweetness that makes it a good choice for those who want to make a good latte or cappuccino to complete that Starbucks experience.

With an intensity of 11, Espresso Roast is just right in terms of what an intense coffee should be, as its caffeine level might be enough for those who are looking for a strong coffee that could make any person awake. 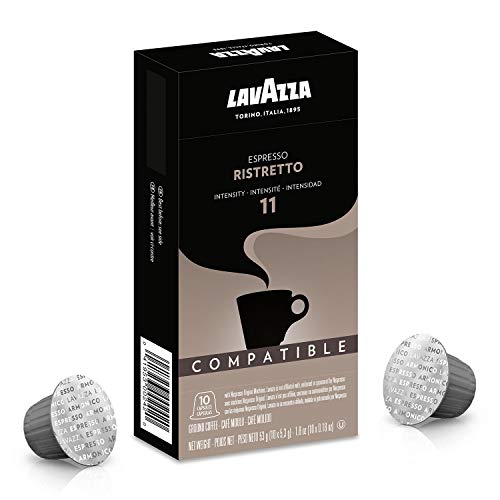 Lavazza Lavazza Ristretto Noble Dark Roast Coffee Capsules Compatible with Nespresso Original Machines (Pack of 60), Ristretto, 60 Count
$28.99 ($0.48 / Count)
Check Price on Amazon
We earn a commission if you make a purchase, at no additional cost to you.

Your espresso doesn’t have to be expensive for it to be strong. That is where the Lavazza Espresso Ristretto comes in to deliver a good and affordable espresso that is strong, intense, and very affordable at a little over half a dollar per capsule. As such, you don’t have to break the bank to get a good coffee that can wake you up early in the morning.

As intense as Espresso Ristretto maybe, one of the things I like is that it has a somewhat light bitterness that won’t immediately attack your taste buds. That means that it doesn’t have the kind of boldness you should expect from some of the more intense dark roasts out there, but it still is quite strong and bold in its own right.

With an intensity rating of 11, you should expect this cup to be quite intense, especially if you want to wake your senses up early in the morning. As such, it works as a good everyday coffee to have if you are looking for something that can wake you up on a budget.

What To Look For When Buying An Intense Nespresso Pod

When buying an intense Nespresso pod, you have to look at the machine compatibility because Nespresso pods can be compatible with either OriginalLine or VertuoLine, as you will almost never find a pod that can be used for both of those machines. The good news for you is the ones I have on this list are all compatible with OriginalLine machines so that you no longer have to look for a VertuoLine.

You want your Nespresso coffee to be delicious because of how strong Nespresso pods are usually on the bitter side of the taste spectrum due to how dark they are. But not all dark roasts come with the same taste, as some stand out with a bit of sweetness and creaminess. As such, if the taste is a huge factor for you because you can’t always stomach a bitter coffee, you should choose a strong Nespresso pod that is known more for its taste rather than for its intensity. Then again, it doesn’t hurt to go for something that not only tastes well but also comes with the right intensity rating.

The intensity rating that you can see on most Nespresso pods doesn’t always pertain to the caffeine level of the pod. Instead, intensity, as used in Nespresso pods, pertains to the roast level and the coffee’s overall taste, as higher intensity levels produce coffee that is darker and more bitter than other roasts.

How Many Milligrams Of Caffeine Are In A Nespresso Pod?

Are All Strong Nespresso Pods Bitter?

Not all strong Nespresso pods tend to be bitter, but the general rule usually leans towards the bitter side of the spectrum in terms of intensity. That’s because higher intensity levels on a pod usually pertain to darker roasts. And if you know your roast levels, darker roasts tend to have a bitter taste because that is when the cocoa notes and the woodsy flavors of the coffee beans tend to come out. But some intense coffee pods don’t really have that bitter taste because of how they were roasted or the beans used for those pods.

Do You Have To Take A Strong Nespresso Pod As An Espresso Shot?

No, there is no need for you to take a strong Nespresso pod as an espresso shot because you are free to do what you want to do with the shot of espresso you pulled out of those beans. You can turn the shot into an americano if you like your coffee with water, or you can even mix it with milk for that creamy latte or cappuccino. And if you want to shake the bitter taste away, you can neutralize your strong coffee with sugar or caramel and pour it over ice.