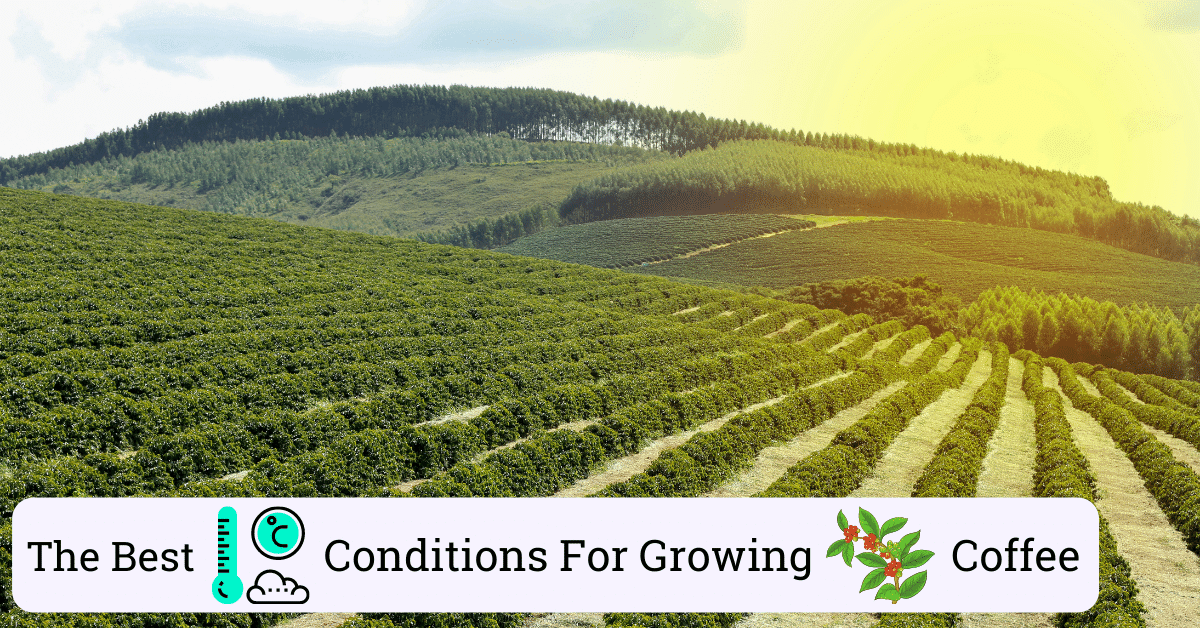 Coffee has, without a doubt, become an integral part of many people’s lives across the globe. Being the third most consumed beverage globally, the demand for good quality coffee beans is increasing every year. The production of coffee, however, is a rather intricate process, with very specific conditions required for optimal results.

The best conditions for growing coffee are in medium-temperature tropical climates containing nutrient-rich soil. The countries that produce the highest amounts of coffee per year exist near the equator all around the globe, including Guatemala, Brazil, Ethiopia, India, and Indonesia.

With the demand for coffee beans often being higher than the supply, there is a growing popularity for growing coffee plants at home. Let’s explore the details behind the growing conditions for coffee so that whether you’re just doing some research or interested in growing coffee beans yourself, you’ll have the important information that you need.

The Best Conditions For Growing Coffee

The majority of the coffee consumed globally is produced in countries along what is known as “The Coffee Belt,” which is a string of countries located between 25 degrees latitude North and 30 degrees latitude South. There are areas in these countries that experience cool to warm temperatures and contain soil rich in nutrients.

There are a wide variety of coffee bean species that can be found globally, over one hundred to be a little more specific. However, there are only two species of coffee beans that are widely produced and sold, namely Coffea Arabica and Coffea Robusta. These two species differ slightly when it comes to their ideal growing conditions.

Since Coffea Arabica and Coffea Robusta are the two highest-produced species of coffee, let’s explore the best growing conditions for these specifically.

Coffea Arabica requires optimal temperatures of around 64-70 degrees Fahrenheit (18-24 degrees Celsius). High temperatures can result in faster ripening and development of the bean, which may not sound so bad, but it has a negative impact on the overall quality of the beans.

When it comes to producing the perfect Coffea arabica bean, there are two ideal climates that it can grow in, these being the subtropical regions and the equatorial regions. Let’s explore these a little further.

The subtropical regions include countries like Brazil who, on a side note, are the current leader in producing the highest amount of coffee annually at around 58 million 60 kilogram (~132 pounds) bags of coffee per year. Their production alone supplies roughly one-third of the world with coffee. Other countries in these regions include Mexico, Jamaica, and Zimbabwe.

The Coffea Arabica bean requires relatively high altitudes in these regions of around 16-24 degrees above the horizon and around 1800-3600 feet above sea level. Having well-defined rain and dry seasons is essential for sustainable production.

The equatorial regions include countries like Colombia, which produce the third-highest amount of coffee annually, at around 14,3 million 60 kilogram (~132 pounds) bags per year, Kenya, and Ethiopia.

In equatorial regions, the Coffea Arabica bean requires a high altitude of 3600-6300 feet above sea level. These areas have frequent rainfall resulting in regular flowering, which allows for two harvest seasons per year. The seasons with the highest rainfall produce the main and first harvest, while the lower rainfall season produces the second harvest.

One thing to note is that, unlike subtropical regions, the high amounts of rainfall in the equatorial regions require the beans to be dried artificially using mechanical dryers. The beans produced in subtropical regions undergo more traditional ways of drying, namely patio drying, where the beans are washed and then spread out to dry in the sun.

Coffea Robusta can be grown in conditions similar to Coffea Arabica, though it is much more tolerable of being exposed to warmer temperatures. These beans are, however, usually grown at lower altitudes of less than 3000 feet above sea level.

The Coffea Robusta species are grown in most of the countries already mentioned; however, Vietnam is the highest producer of this species, producing around 29 million 60 kilogram (~132 pounds) bags per year.

Growing coffee in suitable soil is vital to produce the highest possible quality coffee beans. To ensure healthy produce, soils that drain well are preferred. Coffee beans do not do too well being constantly waterlogged.

Having a minimum soil depth of one meter is recommended to give the roots of the plant the space for growth that they need, as well as enough room for water to drain.

There are many varieties of types of soil that can be utilized for growing coffee. Ideal soils commonly used include fertile red earth soils, also known as red volcanic soil, or a deep sandy loam.

Soils like sandy loam are particularly good because of their larger sand particles, making it easier for water to move freely through them. Silty soils and heavy clay soils are less preferred due to their water drainage tendencies.

From a pH point of view, coffee plants grow well in pH levels of around 5 to 6. Any lower than that, and you will risk reducing the overall quality of the beans that are produced.

Although much of what we’ve already covered may seem rather complex, growing coffee plants at home is actually really viable and, as previously mentioned, something that is becoming increasingly popular.

Unless you live in any of the already mentioned countries or regions, it is recommended that you grow your coffee plant indoors to maintain optimal temperatures and to control the size. Coffee plants can get quite large when grown outdoors.

It is possible to buy coffee plants straight from a nursery, but you could also buy seedlings, cherries, or green coffee beans to plant.

You’ll want to replicate all that we have already covered, just on a smaller scale. Make sure you have good, fertile, well-draining soil. Ensure the plant gets good light, but not too much direct light if you live in a very hot region. Keep the soil relatively damp, but not too wet and not too dry.

You’ll also need to be prepared to transplant your plant into a bigger pot as it grows. As previously mentioned, they can get rather large! Like any fruiting plant, it may take quite some time for you to enjoy your first harvest, an average of 3 to 4 years to be exact, but the wait will be well worth it!

With the growth of coffee being best suited to tropical environments, it is almost impossible to comprehend that coffee is the second most traded commodity globally, second only to oil. It is even more mind-boggling that roughly only 70 countries are responsible for supplying the beans needed for the two billion cups of coffee consumed daily globally.