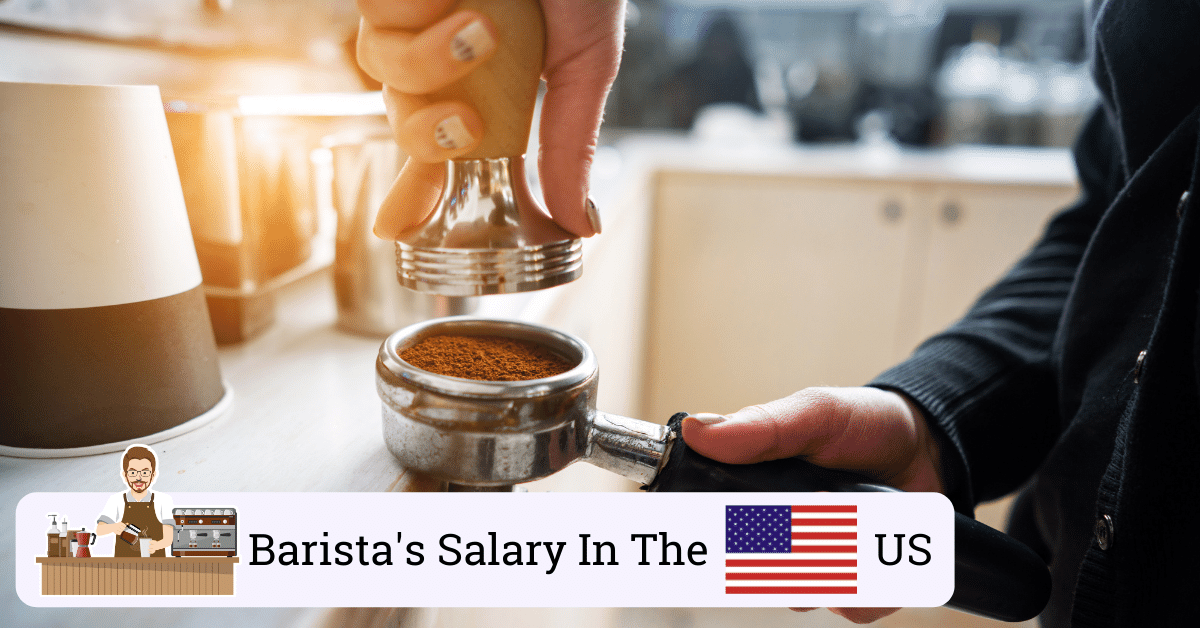 Baristas are a crucial part of the success or failure of your coffee shop or roastery. Their wages are likely to make up a large part of a business’s costs. How much is a barista’s salary, and what factors may determine differences in salaries?

Are you considering going into the barista career field? Stay tuned to find out what you can expect your salary to be in the U.S. and what factors can determine either a higher or more basic salary.

How Much Does A Barista Make?

The average pay range for a barista can vary significantly, by as much as $3.37.

This suggests that there may be several different opportunities for advancement and increased pay which can be based on level of skill, location, and total months or years of experience.

The Top Five Highest Paying Barista Jobs In The U.S.

Barista jobs can be distinguished into five different categories. Some of these categories pay more per year than a basic barista salary.

If you are more qualified, getting accepted and hired for one of the following barista jobs will make you more money than you would have gotten in an average barista position.

How Much Should You Pay Your Baristas? (5 Tips)

It doesn’t matter whether you’re setting up a new coffee shop or thinking of hiring more baristas for your already established coffee shop. Maybe you’re wondering if you’re paying your baristas the correct amount.

There are some important facts to consider when it comes to setting up a barista’s salary. Read on for some tips to make it easier to work out how much to pay your baristas:

1. Know how much your business’s costs are.

Before you can decide on how much to pay your baristas, it is crucial to take a look at the overall costs of your business and work out your expected profits. Next, you should educate yourself on the local laws regarding minimum wages, as well as the mandatory number of hours each shift.

It would help if you also considered your responsibilities when it comes to sick pay, holidays, and any other possible legally required payments. This will help you to conduct an accurate budget for human resources.

The definition of a successful business is a business that can afford to pay its workers a living wage while still being able to make a profit. The minimum wage is below a stable living income in several places, and baristas usually suffer from being paid low wages.

If your business can only make a profit while paying baristas the minimum wage, it might be time to re-evaluate your business plan, cut costs where you are spending too much, or increase your profits.

A good idea to reduce your business’ overall costs without having to cut hourly rates would be by making your scheduling more efficient or by adjusting the prices on your menu.

2. Consider the local cost of living.

Your baristas need to feel that they are safe and secured in their positions. Some of this security depends on whether or not they earn enough in order to maintain a reasonable quality of living. It is quite easy to look up the recommended living wage in your area and then create a business plan according to a fair pay rate.

If your baristas need to work more than their one job in order to sustain a reasonable income to live off of, their morale, as well as the quality of their work, will suffer because of it.

If you pay them a living salary, you are much more likely to have loyal staff members who will work for you in the long term. Their job satisfaction will also be much higher, and they will be likely to produce a better quality drink and do their best at customer service as a result.

3. Recognize and look at experience and skillsets.

A barista’s job often includes a set of technical skills, and their salary should correctly reflect their experience, as well as their abilities. Experienced baristas will work more efficiently than less experienced baristas and are much more likely to produce drinks of a higher quality.

Paying them a little more or just bumping up their salary at the end of the months will work out to be a better option than hiring cheaper and less experienced baristas. You will have more waste when hiring inexperienced baristas, your operations will not go as smooth, and your customers might not be happy.

Instead of hiring cheaper baristas, try to pay an experienced barista more or have the more experienced baristas train an entry-level one who is paid less. This will help you not only to balance the budget of your business but will also provide new employees with opportunities to develop in the barista field.

Your experienced barista will gain training and management skills, and the new barista member will develop into a better barista!

You might have a tight budget for your business, but you can still reward your baristas. Even a tiny amount above minimum wage can make a world’s difference to your employees, but you can also consider providing them with extra curriculum training and development opportunities.

You can consider things like bringing in an expert to train your team of baristas. If multiple baristas decide to take this course, it may be very affordable and will likely mean a lot to a barista in their career. Some people will even prefer to learn new things and choose it over a pay raise.

5. Remember and be mindful of unconscious bias.

When you are evaluating the pay rates, be especially mindful of any bias that can be based on class background, race, and gender. You may unconsciously be inclined to pay a male barista more than a female barista, even though they may be equally qualified.

Women and people of color remain underpaid in this day and age. As the employer, it is your responsibility to evaluate your barista’s pay without taking their gender, race, and personal factors into consideration.

Being a barista is another way of falling in love with your community while having the wonderful opportunity to create an atmosphere for people to take in. At the same time, they sip on their favorite drinks, and maybe you will be so lucky to have a conversation with them.

The pay rates for baristas have been getting higher and higher over the years, so make sure you take a look at your local living income and consider if this field is right for you. Baristas are crucial workers in the hospitality field, and without them, we definitely wouldn’t have so many coffee fanatics!

If you are reading this and you have a team of baristas working for you, tell them that they are important and remind them of their value to you.