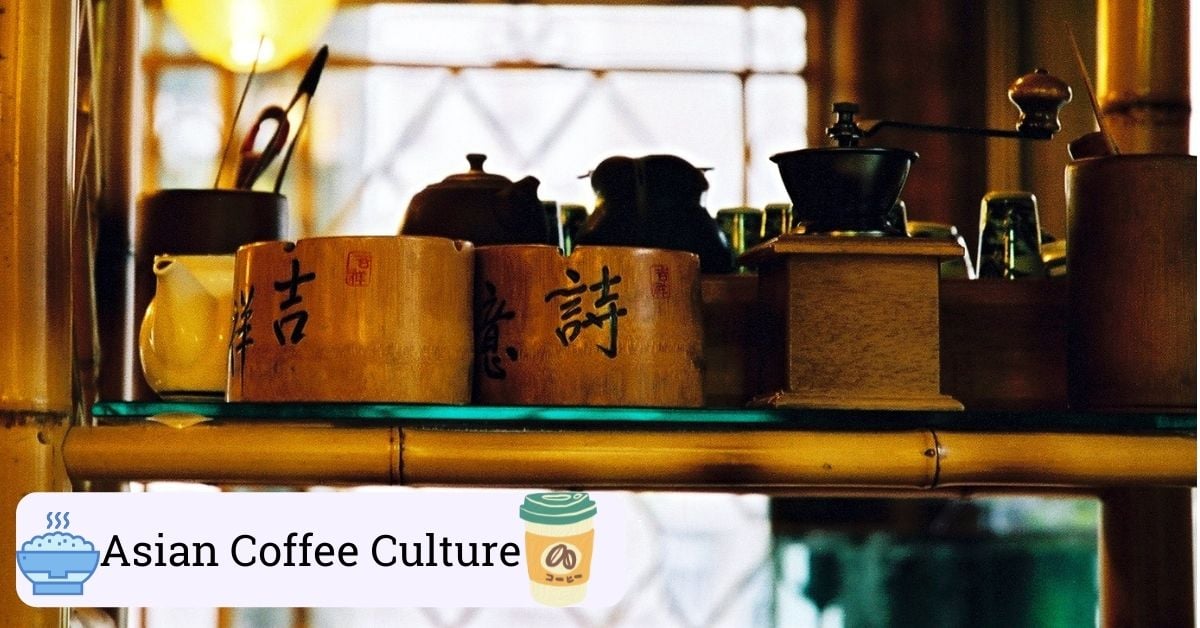 Asian coffee culture is dynamic and diverse. Many Asian countries grow their own beans and have developed traditional drinks. Asia is among the largest coffee consumers, and coffee shops are prevalent everywhere. Specialty coffee is growing, but coffee franchises are dominant in Asian countries.

The coffee culture of Asian countries is unlike anywhere else, and there is so much to discuss, understand, and explore. But there is a great joy to be found here for those who take the time to discover the depths of it. Let’s scratch the surface of Asian coffee culture from bean to cup and enjoy ourselves along the way.

The Coffee Culture Of Asia

Asia is a very large region, a continent in fact. So the coffee culture of Asia is somewhat difficult to define and explain. However, there are some broad areas of the coffee culture in Asia that are particularly interesting and worthwhile focusing on.

One area of the coffee culture in Asia that is particularly interesting is how the coffee industry and subsequent coffee culture have exploded in the past ten years or so. Coffee has been relatively prominent and steadily growing and increasing in demand in Asia since the early 1990s, but the last ten years have shocked the world of coffee.

This rapid growth within the Asian coffee industry surprised the entire world, and certain countries in Asia have very quickly become some of the largest coffee consumers internationally. Every Asian country has its own unique coffee culture, and every city has its own sub-culture of coffee as well. This gave rise to a diverse coffee culture within the continent.

Coffee shops and cafés in Asia hold very high standards and only offer the very best coffee brewed with the best techniques possible to their customers. This outstanding attention to detail and love of consistency and quality has led to the average Asian coffee consumer having a very high standard of what they believe good coffee to be.

Even the major coffee chains that we are used to in the west have increased their standards for the Asian coffee community.

Large coffee brands such as Starbucks, Blue Bottle Coffee, Illy, And Lavazza are all prominent in Asia but produce better coffee and coffee drinks than they do elsewhere in the world, simply because the coffee standard in Asia is so high.

The Third-Wave Coffee Boom in Asia

International coffee culture can be defined with three major tides in coffee experience, demand, and culture. The first wave of coffee is the introduction into the world of brewed coffee, and the standard is anything brewed with any brew method. Dark roasted beans and easy access define first wave coffee.

Second wave coffee is the growth of the coffee industry when coffee becomes a commodity sold by large brands such as Starbucks, and the name of the game is convenience rather than quality or transparency.

Third-wave coffee is defined by specialty coffee. The third wave shines the spotlight on quality and emphasizes the unique greatness of coffee in all of its forms; so long as the coffee is good and grown sustainably, anything can be made excellent.

Asian coffee culture seems to have skipped the first wave and gone directly to the second wave. Very large coffee brands such as Illa, Lavazza, and Starbucks are highly prominent in Asian coffee culture, and these brands are seen everywhere.

The majority of coffee drinkers before 2012 or so said that the best coffee they drank and the coffee that they preferred to buy came from one of these major coffee brands. In fact, the second wave was so prominent in Asia that any small, boutique coffee houses that tried to get started were almost instantly crushed by the industry giants.

The Beginning of The Third-Wave

Around 2012, the third wave made a massive splash into Asian coffee culture. This began primarily in Japan when the first Blue Bottle Coffee shop was established, and Japanese coffee drinkers lined up around the block for their first taste of true third wave high-quality coffee.

Blue Bottle Coffee has become one of the most established brands in Japan and subsequently many other countries in Asia and spear-headed the third wave in Asia.

The third wave boom has pushed all major coffee brands to raise the standard of their coffee, as the average coffee drinker in Asia has come to expect nothing but the best from their coffee, regardless of where they buy it from.

This boom in quality and consistency has driven Asian coffee culture into realms of excellence that other regions are unable to meet.

Since the third wave boom, specialty coffee has become extremely prominent in Asia, and a large portion of the coffee industry is driven by high-quality coffee beans, exceptional brewing techniques and barista skills, and the overall flavor of the coffee.

Coffee shops in Asia countries are entirely unique. Every country has its own version and standard of what a good coffee shop should be, and every country you visit emphasizes a different aspect of coffee.

Shanghai has more Starbucks coffee shops than any other city in the world. However, there are a good number of specialty coffee shops in this island nation as well, and regardless of where you buy coffee in Japan, it is always excellent, as the Japanese people hold good service and excellent quality in very high regard, and the consumers in Japan are the most discerning in the world.

Another example to look at is the coffee shops in Taiwan. These coffee shops are almost entirely specialty third-wave coffee shops that emphasize quality and diversity rather than convenience and accessibility.

Even the smallest coffee shops in Taiwan serve exceptional quality coffee, and there is no such thing as a bad cup of coffee or a poorly prepared drink in Taiwan.

These are only two examples of coffee shop types that Asian coffee culture has led to, but every Asian country has its own unique take on coffee shops and cafés. So be sure to visit as many as possible if you can.

A major aspect of the coffee culture in many Asian countries is coffee production. Two Asian countries, Vietnam and Indonesia, have become the second and third highest producers of coffee beans in the world.

These people take great pride in their coffee farms, and what began as massive farms designed to meet consumer demand at means necessary has grown into a diverse and specialized coffee growing community that produces excellent and very high-quality coffee beans.

International coffee demand is only increasing, and as it increases, the average coffee drinker becomes more aware of how good coffee can be and so becomes more discerning.

This means that coffee producers everywhere have begun to increase the standard quality of their coffee beans, and Asian coffee growers were the first to do so in order to meet the demands of the growing coffee culture in Asian countries.

Growing coffee is at the core of many Asian coffee cultures, and these coffee people have developed their own ways and methods for growing coffee and have also developed several traditional coffee drinks that are not found anywhere else in the world.

The fact that so many Asian countries grow and roast their own coffee means that several countries in this region have been drinking coffee for hundreds of years, some even longer than western countries.

A large part of coffee culture in many Asian countries is the brewing, preparation, and consumption of traditional coffee beverages that are deeply rooted in the history and culture of the nation.

What Coffee Drinks Are Popular In Asia?

While there are several traditional drinks found in Asian coffee culture, the countries that have experienced the third wave boom have widened the coffee drink selection based on what coffee lovers enjoy.

Typical coffee drinks in Asian coffee culture are lighter and sweeter than elsewhere in the world. Rich, sweet drinks such as the cappuccino and the mocha as very popular, and iced coffee are also a favorite in many places.

Black coffee and strong drinks such as the cortado or the flat white are less prevalent, and standard filter coffee is only consumed by a small percentage of coffee lovers.

Most Asian people tend to drink very convenient coffee drinks at home, such as packets of instant coffee drinks, but they order very sophisticated drinks from cafés and coffee shops.

Coffee culture in Asia is very sophisticated, and those who really care about their coffee see drinking good coffee as a sign of sophistication and class, so they will often drink very complicated drinks to demonstrate this.

As a westerner, this makes ordering a coffee very easy, as many western drinks are available in Asian coffee shops. However, there are flavors, syrups, and styles that may seem unfamiliar.

Asian coffee culture is unlike anything else. Describing the culture of coffee on this continent is very challenging, as it is so diverse and no two countries perceive or consume coffee in the same way.

The best way to experience Asian coffee culture is to visit for yourself and take the time to stop at various coffee shops and cafés. Every place has a unique culture of coffee, and the diversity is a great joy.

There is too much coffee culture in Asia, and it is simply too diverse to cover completely in one article, so take the time to find out more for yourself and explore some of what you find by recreating it at home, visiting Asian coffee shops, or by taking the plunge and traveling to Asia to experience the extensive coffee culture for yourself!