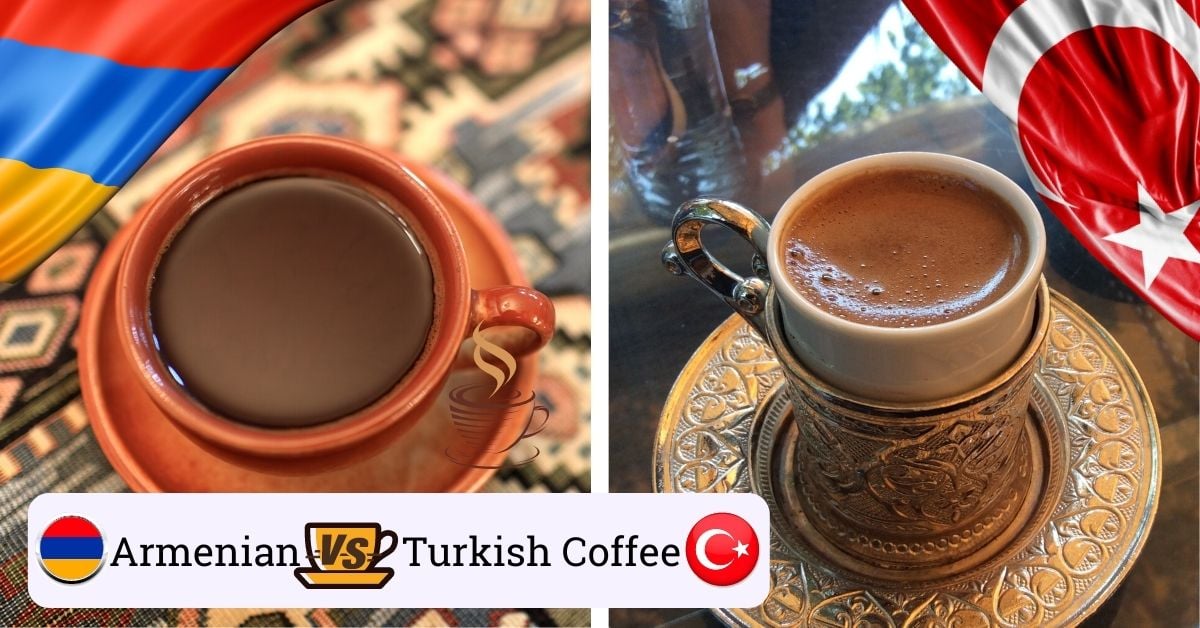 The strong taste and amazing aroma that both Armenian and Turkish coffee offers is like no other coffee in the world! However, you may be wondering what the difference is between the two coffees and are they the same?

Turkish and Armenian coffee have many similarities from their bean to their caffeine content. However, they are different. The Turkish and Armenian people have certain ways of preparing and serving their coffees, and the coffees’ history sets them apart from each other.

This article provides deep insight into the differences between coffees when comparing them. Many people have the misconception that they are the same. Keep reading further to broaden your knowledge of Armenian and Turkish coffee and to prevent misconceptions about them!

What Is Turkish Coffee?

Turkish coffee (Türk kahvesi) is a very strong coffee made from the Arabica bean and has a very fine, powder-like grind which is unfiltered. Turkish coffee grounds are available in various roasts ranging from medium to dark, affecting sweetness levels.

Turkish coffee distinguished itself from other types because of its preparation method. Thanks to the Turkish people who developed these methods, the “Turkish coffee” name was given. It’s so popular that the drink has spread worldwide and has even made its way to the UNESCO World Heritage List.

It is enjoyed by all cultures while at the same time being an essential part of Turks’ cultural and social history.

What Is Armenian Coffee?

Armenian coffee, or in Armenian soorj, is often described as a rich cup of espresso. Armenian coffee is made with finely ground coffee beans that are almost powder-like, measured water, and optional sugar. All of the ingredients get combined into a jazzve coffee pot. The mixture is then cooked over direct heat until the crema (the foamy white puff on top of espresso) appears and rises.

Although Armenia is famous for its delightful coffee, it does not grow coffee there. Most Armenians use imported Arabica beans from Colombia or Sidamo Beans from Ethiopia. In Armenia, coffee is consumed throughout the day. Small stalls selling freshly roasted coffee beans line the streets. Although Armenian coffee is not as popular as Turkish, it is still a must-try!

How Is Turkish Coffee Prepared?

Turkish coffee is made by combining finely ground coffee beans with water, and depending on preference, sometimes sugar is added, which is all stirred together. It is traditionally brewed in a cezve/ibrik over medium heat. As the coffee warms, a dark foam begins to form on top, and a small amount is transferred into the cups, then placed back on the heat.

Sugar is then added. If you ask for “sade” no sugar, “az seker” very little sugar, “orta” for 1 to 2 teaspoons of sugar, and “sekerli” for 3 to 4 teaspoons of sugar. Cardamom, an aromatic spice, if used in the whole form, is usually boiled in at this point then removed after serving. After boiling the water for about 3-4 minutes, the brew, including the coffee grinds, gets distributed into cups

The ground coffee powder settles to the bottom of the cup, and the remaining liquid is consumed. Traditionally milk is not added to the coffee. However, in modern times, all kinds of milk are added, from cow’s milk to soy milk. Compared to other preparation methods, leaving the coffee unfiltered results in a much higher caffeine concentration.

How Is Armenian Coffee prepared?

Espresso cups are filled halfway with cold tap water, about 2oz, and are placed into the Armenian pot/jazzve. The size of the jazzve will determine how much coffee it can make at a time. Traditionally only cold water is used, not hot water or other liquids.

Then finely ground coffee is added, and If you like your coffee sweet, a pinch of sugar can be added. The Armenians also are a fan of using cardamom in their coffee, and they do this by placing the spicy pod into the cup while brewing.

The coffee starts to rise and form bubbles on the edges, but a close eye is kept on the coffee, so it doesn’t overboil! The jazzve is quickly removed from the heat, stirred, and returned to the stovetop; this is repeated twice. The soorj is then carefully poured into an espresso cup or a traditional demitasse bazhak, which has designs/patterns. It is poured slowly as the crema is an important part of indicating a good cup of Armenian coffee.

How To Serve/Drink Turkish Coffee?

Before serving Turkish coffee, a glass of water is served as a palette cleanser. Remember that serving your elders is considered highly respectful in Turkish culture. The coffee is poured into a small demitasse type cup with a handle or a “fincan,” which comes in various styles that are commonly gold or are full of patterns.

Ground cardamom is sometimes and optionally added in at this step. No spoons are needed as stirring once poured is not necessary because the sugar is already added, and the grounds are at the bottom of the cup.

Turkish coffee is paired with a sweet treat like baklava or lokum (Turkish delight) to balance all the flavors together. Due to the high caffeine content, no more than one cup is recommended, so smell the wonderful aroma, sip slowly and enjoy!

How To Serve/Drink Armenian coffee?

The coffee is served throughout the day with a slice of traditional Armenian gata (a sweet bread similar to a pastry with a wonderful flaky texture and a delightful light custard-like filling in the center) or choreg (a traditional Easter bread).

Soorj is also slowly slipped to fully take in the amazing taste from the start of the cup so that you can enjoy the crema and coffee until the end! When drinking the coffee, remember to also engulf the aroma by smelling it as you sip and in between sips.

The History Behind Turkish Coffee

The first encounters with coffee in Turkey occurred in 1517, when a Turkish governor in Yemen, Ozdemir Pasha, presented Sultan Suleyman with some ground coffee. Soon after, Turks invented their new method of brewing coffee. They finely ground the coffee beans into a fine powder and brewed it slowly with fire or hot sand into the Ibrik/Cezve.

That was the beginning of coffee becoming an important part of Ottoman tradition. In the mid-1600s, coffeehouses in Turkey became hotbeds of citizen debate, particularly on religious and political issues. All this sparked outrage among Ottoman leaders, who went so far as to shut down some coffee shops.

During the 17th century, Turkish coffee spread throughout the world. It arrived in Vienna for the first time after the second siege of Vienna in 1683. Then it gained popularity in Rome and London. Coffee was sold to the public in raw beans until the nineteenth century, which required special pans to roast. They would then grind the roasted beans with hand mills.

Today Turkish coffee is still a major part of modern coffee culture. It is one of the most famous coffees and is served in many Middle Eastern restaurants worldwide. People still meet up over a good cup of Turkish coffee to discuss their lives.

The History Behind Armenian Coffee

Stories of coffee in Armenia all begin from Ethiopia, where it was invented and discovered in the middle of the 15th century. It traveled through Yemen and then north to the Middle East via the Red Sea. Coffee then made its way to the Near East, which reached Armenia during the 1500s.

Today Armenian coffee traditions have been passed down for centuries from generation to generation, still used in modern Armenia and restaurants worldwide. The Armenians celebrate, make, and drink their coffee, different from Turkey despite the Turkish influence.