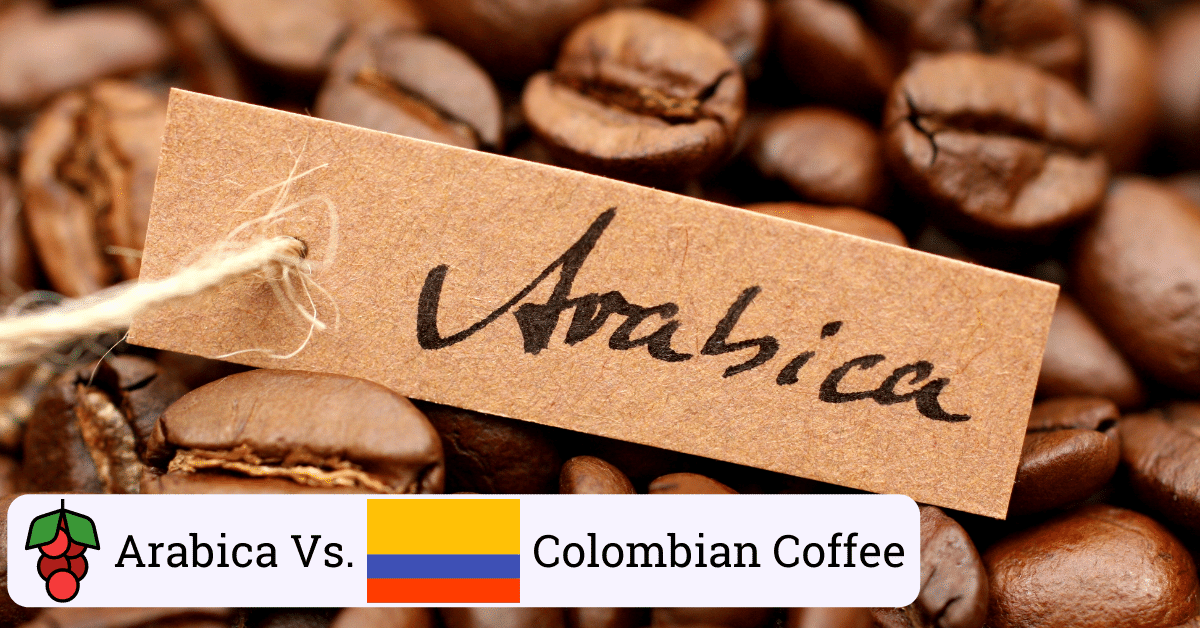 There are so many terms used in the world of coffee that deciphering them all can be a challenge. The terms “Arabica Coffee” and “Colombian Coffee” are used everywhere, but what do they mean, and what are the differences?

Arabica coffee is the name given to coffee beans that are grown on the Coffea Arabica tree species. This tree grows in many different countries, which means that Arabica coffee can be from several different places. Colombian coffee refers to coffee that is grown in the nation of Colombia.

Coffee is important in almost every nation on earth. This means that almost every person on earth drinks coffee in some form, and this has given rise to confusion based on the various common coffee terms. Let’s bring some clarity to the terms “Arabica Coffee” and “Colombian Coffee.”

Arabica coffee in the modern age does not refer to one specific country of origin, nor does it refer to a type of bean roast or a type of coffee drink.

The name Arabica is given to the coffee that is grown on the tree species Coffea Arabica.

Coffea Arabica is a tree that originates from the east African nation, Ethiopia. The tree was first cultivated in Yemen, where the first records are shown of the beans being roasted and used to brew coffee for drinking.

Arabica coffee accounts for such a high percentage of international coffee consumption due to the exceptional drinking coffee that is produced from these beans.

Depending on where the beans are grown, there may be flavor profiles of fruits, berries, woods, earthiness, smoke, and spices present in coffee brewed with Arabica beans.

Colombian coffee is a term that is thrown around in the coffee world, and it is often meant to be synonymous with good coffee beans, but what does it really mean when coffee is billed as “Colombian Coffee”?

Colombian coffee simply means coffee beans that are grown in the nation of Colombia.

There really is no other meaning behind the term, but the fact that it has become synonymous with good coffee is because coffee beans from Colombia are considered to be some of the best in the world.

Colombian coffee is regarded to be some of the best in the world due to several reasons, but the biggest is the high quality and excellent flavors of Colombian coffee beans.

The climate in Colombia is perfect for cultivating coffee beans. The elevation of the coffee district in Colombia, the warm and consistent temperatures in the area, and the ideal annual rainfall lead to a high yield of coffee berries and high-quality coffee beans.

Colombian coffee is harvested by hand, which ensures that only the best coffee berries are collected for the preparation and harvesting process. No unripe or inferior beans are used for high-quality Colombian coffee.

The final factor in the high standard of Colombian coffee is that Colombia produces 100% Arabica coffee beans.

Arabica coffee beans are the best beans to use for brewing coffee, and the fact that Colombia produces only this type of coffee already sets the Colombian coffee name above many other countries of origin.

Colombian coffee beans are known to be very high quality, rich-tasting with strong flavor profiles, and are ideal for roasting and brewing in various ways.

We have learned that Arabica coffee is a type of coffee bean grown on a specific coffee tree species. We have also established that Colombian coffee refers to coffee beans that are cultivated in Colombia.

This means that Arabica beans can be from any coffee-producing nation, while Colombian beans are only from Colombia.

Arabica coffee beans are grown in Colombia, and Colombian Arabica beans are considered to be some of the best in the world.

In fact, Colombia only grows Arabica beans, and Colombia is the third-largest coffee producer and exporter in the world.

Colombia produced 858 million kilograms of coffee in 2020. This figure is only beat by Brazil and Vietnam. 95% of the coffee that is produced in Vietnam is Robusta coffee, which means that Colombia is the 2nd largest producer of Arabica Coffee beans worldwide.

The confusion surrounding these two terms is most likely due to the wide use of the term Arabica coffee.

Arabica coffee is the name given to coffee beans that are grown on the Coffee Arabica species of the coffee tree. These beans are considered to be the best coffee beans for brewing coffee drinks due to their rich yet smooth flavor, low acidity, and high oil content.

Colombian coffee is the term used for coffee beans that are grown and cultivated in the nation of Colombia. All coffee produced in Colombia is Arabica coffee from the Coffea Arabica tree.