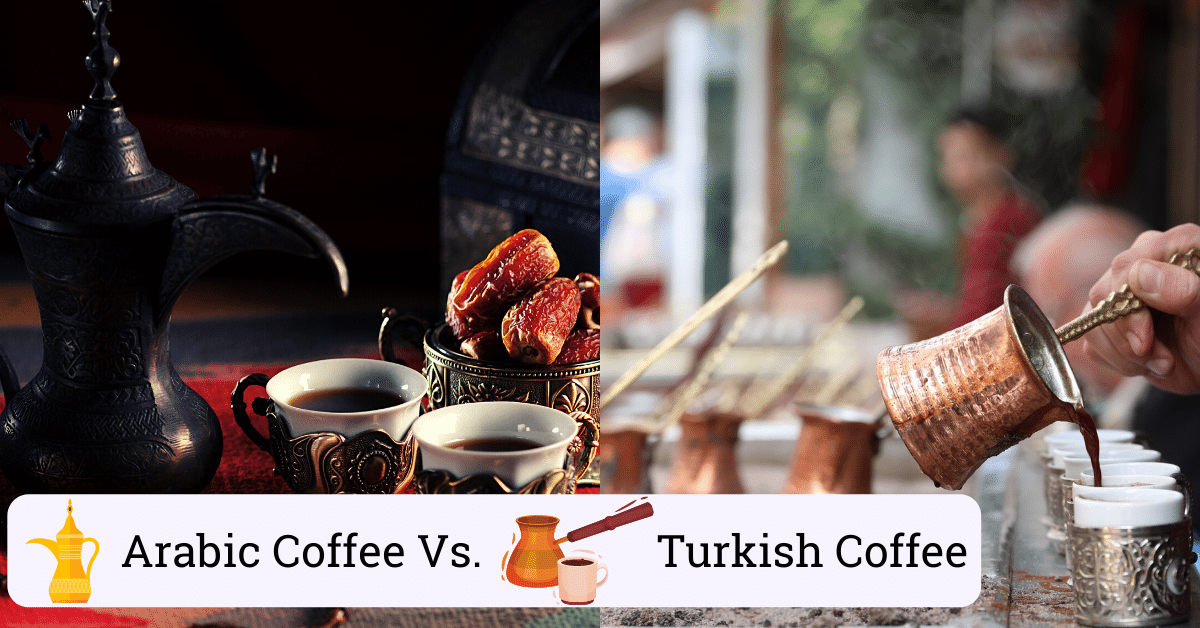 There are similarities between these two types of coffee, but they are significantly different when you look closely and compare the two directly. Let’s compare Turkish and Arabic coffee to better distinguish the differences between them.

Arabic and Turkish coffee are both enjoyed through the Middle East, particularly in the Mediterranean. Both of these coffee types are unique, but they tend to be lumped together by everyone outside of the Middle East.

Technically, the term Turkish coffee is a brewing method, not a type of coffee, but it has come to refer to a very particular type of coffee that is unique to the region of Turkey.

Let’s discuss the differences between these two coffee types to clear up any confusion and better define these coffees for everyone.

Turkish coffee and Arabic coffee are both predominantly prepared with Arabica coffee beans. This is simply due to the quality and flavors of the beans compared with other coffee types such as Robusta.

The type of beans used for these coffees is generally the same due to the fact that both Turkish coffee and Arabic coffee originate in very close proximity.

Modern varieties of these coffees tend to use coffee beans from Yemen, Brazil, Columbia, and Africa.

While both can use the same beans, the way the beans are roasted varies between the two types of coffee.

Some Arabic coffee drinkers prefer their coffee to be made with light or blonde roasted coffee beans only.

This difference is important; how the coffee is roasted has a profound impact on the taste of the coffee when brewed.

We all understand that one of the most vital steps in the process of the coffee experience is coffee preparation and brewing.

This is the only coffee in the world that is prepared in this way. The reason why Turkish coffee is ground so finely is due to the brewing process that is used.

A fine grind like this results in a very short brewing and extraction time when preparing the coffee and allows the strength and intensity of the coffee to be fully experienced by the drinker.

Turkish coffee is brewed in a very small open coffee pot with a long handle called a cezve. The cezve is placed over an open flame or inserted into hot sand for brewing the coffee.

The coffee is only brewed for 3 or 4 minutes before being poured into small Turkish drinking cups. Only one cup is prepared at a time.

Arabic coffee is prepared to be a much coarser grind than Turkish coffee. The coarse grind of Arabic coffee means that it requires a significantly longer brew time to correctly extract the full flavor of the coffee.

Arabic coffee is brewed for 15 – 30 minutes in a large coffee pot called a dallah. The dallah holds enough coffee for multiple cups of coffee and is ideal for slow brewing the coarse Arabic coffee grinds.

This brewing method also allows the Arabic coffee beans to be roasted much more lightly than Turkish coffee, as there is much more time for the favors of the coffee to be fully extracted from the beans.

Turkish coffee is not prepared with any additional ingredients, but it is not uncommon for sugar to be added to the coffee after brewing it to sweeten the drink.

Other than this, there are no other ingredients added to the coffee, or else it is not considered true Turkish coffee.

Arabic coffee does not need to be spiced, but it often is.

Turkish coffee tastes very intense and heavy, with notes of spice and earthy flavors. The intensity of the coffee from the dark roasted beans, but the overall flavor notes are dependent on the exact coffee beans that are used,

Like Turkish coffee, Arabic coffee gets its overall flavor from the beans that are used. However, the brewing methods and additives in Arabic coffee vary widely. This means that Arabic coffee may taste very weak and light or very intense, heavy, and dark depending on how it is prepared.

Turkish coffee and Arabic coffee are not the same.

The main differences lie in the brewing methods and techniques.

Arabic coffee is very broad and is prepared in many different ways with a variety of different bean roasts.

Turkish coffee is only prepared one way with dark roasted coffee beans and no other ingredients.

Both coffee types are unique and immensely flavorful. Do yourself a big favor and give them both a try to experience the differences for yourself.