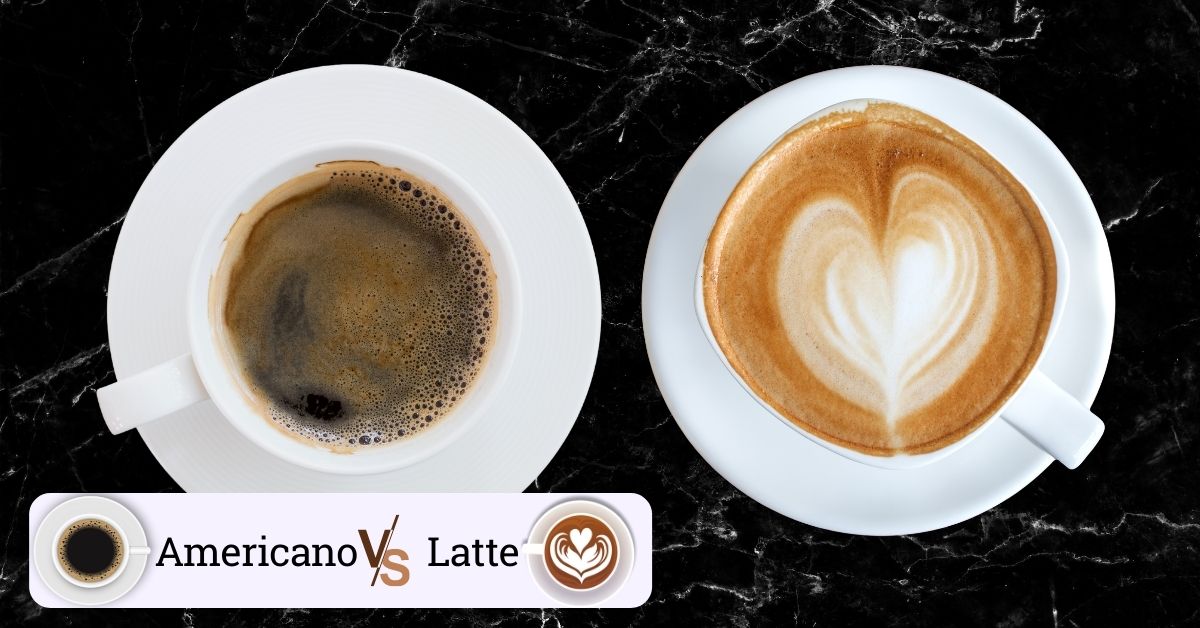 Americanos and lattes are two favorites among coffee lovers. The popular drinks have a shot or two of espresso in common, but that’s about all they share. As far as flavor and looks go, these coffees are opposites. What makes two coffee drinks, each made with espresso and just one other ingredient, turn out so differently?

Americanos and lattes are both espresso-based coffee drinks, but whereas Americanos have water added to the espresso, lattes have milk added. This difference gives Americanos a dark-brown color and rich coffee taste and makes lattes light-brown with a mild, sweet, creamy taste.

Adding either water or milk to espresso will create two completely different drinks. One dark and intense, the other light and mild. Let’s compare these two classics on the coffee scene, Americanos, and lattes, to see how they measure up against each other.

How Are Americanos And Lattes Different?

Americanos and lattes are very different drinks, each having distinctive characteristics. Coming up: a breakdown of how these coffees compare when it comes to flavor, appearance, and preparation methods.

Wondering what ingredients make Americanos and lattes? You’re about to find out.

Americanos and lattes both start with espresso. Some baristas use one shot, others use two.

What Ingredients Go Into An Americano?

What Ingredients Go Into A Latte?

Turn your espresso into a latte by adding hot milk. The typical latte is made with one-third espresso and two-thirds milk.

Pick your milk to suit your taste. From whole and 2% to plant-based, you’ve got options. Whole milk (from a cow) works best and tastes creamiest. Oat milk tends to have the best foaming potential of the milk alternatives.

A latte trend is to liven up the basic drink with flavors and colors. Whether you drizzle in caramel, vanilla, or hazelnut syrup to give your latte a new taste or add matcha powder or turmeric for a green or golden color, there are countless ways to make your latte showier.

Here’s the lowdown on making Americanos and lattes.

How To Make An Americano

To make an Americano, pour your shot or two of espresso into a mug, then add double the volume (or triple) of hot water. For an iced Americano, make the water cold and throw in a few ice blocks.

Tip: Pour in the hot water soon after the espresso to encourage the coffee to form a delicate foam called crema.

How To Make A Latte

I’ve heard people say you make a latte by pouring milk into an Americano. Nope!

Getting a latte just right takes care. You start by pouring your espresso into your mug, then adding double the espresso’s volume of steamed milk and a wisp of foam on top.

The type of foam you’re aiming for has got teeny air bubbles that give it a velvety texture. This special foam is called microfoam, and the easiest way to create it is with an espresso machine’s steamer.

Creative baristas don’t leave their lattes with a plain foam layer. They create latte art! They use the contrasting dark espresso crema and light milk foam to paint pictures as a finishing touch. Popular designs are a heart, tulip, and rosetta.

Not sure what Americanos and lattes look like? Read on.

An Americano is a dark-colored brew with a fine layer of golden coffee foam on top.

A standard latte has a light brown base with a silky microfoam crown.

Latte art is now so popular that it’s not a question of whether you’ll see a picture in your foam, but what picture you’ll find. Talented latte artists delight customers with surprises in their foam, like lions, swans, butterflies, and even cartoon characters.

Americanos have a bold, earthy taste revealing some of the complex flavors inherent in the coffee beans they’re made with.

An Americano’s flavor largely comes down to the quality of the espresso it contains. There’s no milk to mask less-than-tasty espresso, so your taste buds will know if you skimp on coffee beans!

The ratio of espresso to water will also influence the Americano’s flavor. One part espresso to two parts hot water tastes like a less intense espresso. With more hot water added, the drink tastes similar to drip coffee.

Americanos have a thinner consistency than espressos yet a satisfying mouthfeel.

A standard latte has a creamy, vanilla-like, nutty flavor.

Whereas top-quality coffee beans are essential to an excellent Americano, the milk quality determines a latte’s success.

Lattes have a milder coffee flavor than Americanos (even when the drinks contain the same amount of espresso) because the milk smooths out the espresso’s intensity.

Lattes have a creamy texture with a layer of silky microfoam on top.

Americano Vs. Latte: Best Coffee Beans To Use

The tastiest Americanos and lattes are made with the best beans!

As there’s nothing in Americanos to hide the taste of bad coffee beans, espresso-grade beans are a must – ideally freshly ground.

Here’s when Americanos and lattes came to be.

The Origin Of The Americano

“Americano” is Italian for “American”. It’s believed the first Americanos were made by American soldiers based in Italy during WW1. Apparently, the soldiers watered down the Italian espresso coffee to make it more like the coffee they were used to back home. The Italians then named this coffee drink after the people who created it.

The Origin Of The Latte

“Latte” is Italian for “milk”. There’s no better name for this coffee, the milkiest of all espresso-based sips. The latte’s exact origin isn’t known, but it’s claimed that this drink first became really popular in Seattle in the 80s.

Something Americanos and lattes have in common (besides their espresso base) is that they’re both delicious, timeless coffees. And I love them equally. When I’m feeling intense, I’ll order an Americano. However, when I’m looking for fun, it’s got to be a lilac unicorn latte with sprinkles and mini marshmallows!