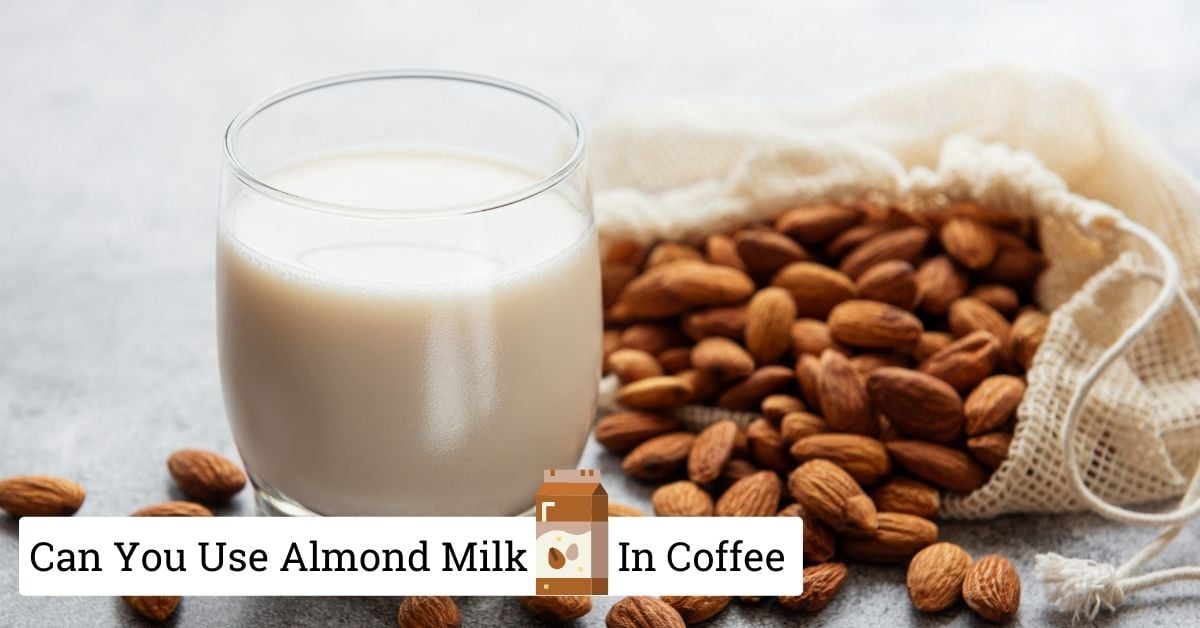 Coffee is a drink that is enjoyed in various ways. Everyone likes their coffee with their own special touch, and everyone has their own preferred coffee drink recipe. One of the most widely enjoyed ways to enjoy coffee is to combine it with milk, but what if dairy is not an option for you? Can you use almond milk in coffee?

You can use almond milk in coffee. Almond milk is a good dairy milk alternative as it compliments coffee well, it has a pleasing texture, it combines well with coffee without clumping, and it steams well, which allows it to be used to create various coffee and milk drinks such as cappuccinos.

Almond milk is one of the most popular dairy milk alternatives due to its texture, viscosity, and flavor. Almond milk is used widely in cooking, baking, and various other recipes, but what does this milk taste like in milk? Can almond milk be used in coffee without ruining the beverage? Does almond milk work well in coffee as a dairy substitute? Let’s find out!

Can Almond Milk Be Used In Coffee?

There are so many dairy milk alternatives available these days, and it can be challenging to know which variety is a good match for the coffee, which milk alternatives work well in coffee, and which of these kinds of milk actually elevate the taste of coffee in a way that is similar to traditional dairy milk.

Almond milk is one of these dairy alternatives that seem to be available almost everywhere now, and this leaves many wondering if this milk can be used in coffee and if it works well in coffee drinks?

Almond milk does not coagulate in coffee, it does not clump up, it does not alter the flavor of the coffee too much, and it brings all of the milk mouth-feel, thickness, creaminess, and texture to the cup that dairy milk does.

The truth is that almond milk is not exactly the same as dairy milk; how could it be? However, as a replacement for regular milk, there is almost nothing better than almonds. This alternative elevates coffee in the same way that regular milk does, it can be used to prepare all of the same coffee and milk beverages that we have come to enjoy, and it is very widely available at affordable prices.

If you are unable to use dairy milk, if dairy milk is not available where you are, or if you are seeking an alternative to dairy milk, almond milk is one of the very best choices as a healthy, affordable, and readily available alternative.

Is Almond Milk Good In Coffee?

Every coffee person who drinks their coffee with milk does so because dairy milk changes the taste, flavor, and texture of coffee in a very pleasing way. Milk is a naturally sweet liquid compared to milk, and this sweetness, combined with the creamy fatness and mild, gentle, covering flavors of milk, make it an ideal pairing with strong, intense, bitter, overpowering coffee.

For this reason, coffee lovers who consider switching from dairy milk to almond milk wonder if the milk alternative has the same effect on the beverage or if the almond milk will somehow ruin their beloved coffee?

Almond milk, while not the same as dairy milk, is delicious and pairs excellently with coffee. Almond milk is naturally sweet and thick, and the oils from the almonds have a similar fat to that of dairy milk.

These factors mean that almond milk, while not a perfect taste match for dairy milk, is an ingredient that elevates coffee in the same way as dairy milk, although it simultaneously has its own unique qualities as well.

Almond milk is very good in coffee, especially if the milk is of very good quality and if the drink is prepared well.

If you enjoy your coffee with milk, almond milk is a great substitute, and once you become acclimatized to the new flavors, it is as enjoyable in coffee as dairy milk is, and the natural flavor of the almond milk acts to bring the flavor of the coffee itself through more than regular cows milk.

One of the main concerns of those who may be switching to almond milk as a dairy alternative may be the quality of almond milk when steamed.

Steamed milk is used to create delicious coffee beverages such as cappuccinos, lattes, macchiatos, flat whites, and cortados. These drinks are made from milk, and the quality of the drink is determined by the quality of the steamed milk. If almond milk does not steam well, it cannot be used for these iconic drinks.

Almond milk steams well, produces excellent microfoam, and it retains foam very well. This is excellent for all those who are lovers of espresso-based coffee and milk drinks, and it means that almond milk is an ideal alternative for these drinks, as it is for all other coffee and milk beverages.

Almond milk does steam well, and it also holds temperature well. It is slightly thinner than dairy milk, so it takes longer to foam to please textures, and it does not reach the same level as foam as dairy milk does for beverages such as dry cappuccinos, but for everything other than that, it is ideal.

Learning how to steam almond milk takes some practice due to its viscosity, but once you learn how, almond milk is as simple to steam as dairy milk and works just as well under the steam wand.

In the end of it, almond milk can be used in coffee, and not only can it be used in coffee, but it is also excellent in coffee in almost every way. This milk is a fantastic alternative to dairy milk, and it is a healthier option for most people as well.

Using almond milk in your coffee may take some adjustment at first, but once you are accustomed to it, you may not return to any other milk again! Almond milk is delicious, it works well in coffee, and it is as versatile as dairy milk for coffee and milk beverages.