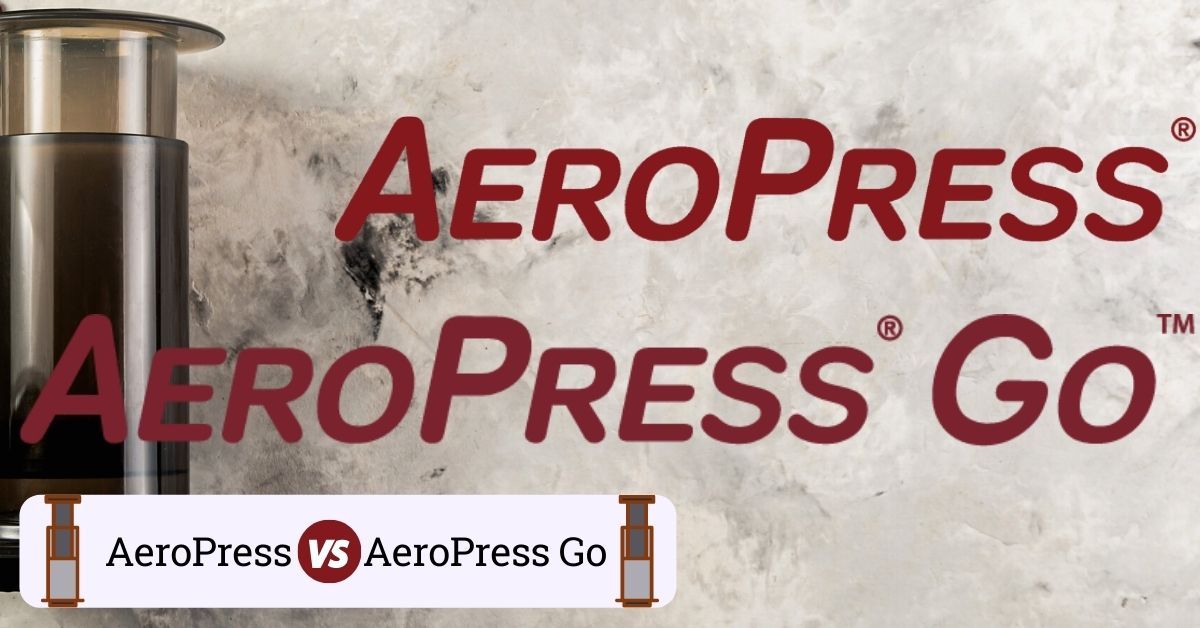 The AeroPress is among the most widely used and most beloved coffee brewers ever. This simple brewer is effective, practical, versatile, and able to brew incredible coffee. The AeroPress Go is the most recent version of this iconic brewer, but many users state that these brewers are almost identical. Are there any real differences between the AeroPress and the AeroPress Go?

The AeroPress Go is smaller and slimmer than the original version. It comes with a smaller stirrer and coffee scoop and is designed to fit neatly within the included travel mug along with all of its accessories. The original AeroPress is larger and more capable but much less portable than the Go. The Original AeroPress is something truly special. There was no other coffee brewer of its type before it, and it revolutionized the world of coffee brewing.

This simple brewer was developed in 2004 and released in 2005, and since then has grown to become one of the most important and widely brewers we have. This brewing device is versatile, simple, and effective, and it brews excellent and consistent coffee.

There are several different techniques and methods that can be used for brewing with the AeroPress, and each of them yields unique results. The original inventor of AeroPress has a preferred method for brewing but encourages every user to develop their own method as they see fit.

This has led to a very diverse range of AeroPress brewing techniques, so many, in fact, that by 2008 an official World AeroPress Championship competition was instituted by fans of the device.

The AeroPress produces a small, strong amount of coffee similar to espresso. The maximum coffee output capacity of the Original AeroPress is 10oz, but this is often used as a base to create other espresso-based drink types.

This brewer uses manual pressure to force water through ground coffee to create the brew and filters the coffee through a specialized AeroPress paper filter for maximum clarity.

The AeroPress is a fantastic brewer that makes great coffee, but the makers of this brewer did not stop with only one iteration. The AeroPress Go was released in 2019 by the makers of the Original AeroPress. This brewer is designed to be a complete travel coffee brewing solution and is designed to be more compact and versatile than the original version of the brewer. The Go is accompanied by some unique accessories as well that make this device even more travel friendly.

The smaller size of this brewer is complimented by sleek design features that make it easier to store and carry and make the Go an ideal travel companion for every coffee lover.

The Go version of the AeroPress is designed to fit into the included travel mug, along with all of the accessories that come with the brewer. Paper filters, a filter holder, a foldable stirrer, a coffee scoop, and a filter cap.

The 5 Differences Between These Brewers

We have covered the basic characteristics of each type of brewer, so let’s take the time to compare the important differences between them to highlight what makes both types of AeroPress brewers unique and useful.

These are the five most important differences between the Original AeroPress and the AeroPress Go.

The original version has four numbers on the side of the brew chamber for measurements, while the AeroPress Go only has three. This means that the Go version brews overall less coffee per brew than the original version.

The shape of the brewers is different as well. The travel version of the AeroPress has a slightly smaller opening for inserting coffee and water, and the stand fins of the brew chamber are smaller and narrower to accommodate better travel capabilities.

The shape has to be different for the Go to fit within the included travel mug, but the overall operation of the two brewers is functionally the same.

Both the Original AeroPress and the AeroPress Go come with several included accessories that make using the brewer better and simpler overall.

The original versions come with the brewer itself, a stack of filters, a funnel, a filter stand, a filter cap, a large T-shaped stirrer, a large coffee scoop, and an optional tote bag.

The Go version includes the brewer, a smaller coffee scoop, a collapsible stirrer, a stack of filters, a filter storage carton, a filter cap, a travel mug, and a travel mug lid.

4. The Usability And Portability

The Go version is designed to be compact, even when stored away with its accessories, takes up no more room than a small thermos or travel mug, and even has some leftover space within its container for some ground coffee or whole beans.

Both brewers are fundamentally the same when brewing, but the filter screen in the Go has fewer brew holes, which means that more pressure is built up within the brew chamber, which can improve the quality of the brew.

The coffee that is produced by these two brewers is essentially the same, but there are some features that change the general experience and flavors of the possible brews.

The original version AeroPress is larger and so accommodates more coffee and water, which means that it can produce larger, more well-rounded brews.

The fewer holes in the Go brew screen combined with its smaller size means that this brewer is better for producing stronger, smaller coffees similar to espresso, making it the ideal brewer for using to create espresso-based drinks.

The AeroPress and the AeroPress Go and very similar in almost every way, but there are distinct differences between the two. The Go version of the AeroPress is ideal for those who want their brewer with them to the office, on a trip, while camping, or out and about. The original version is the best option for brewing at home.